While appreciating role of India, especially Tripura, in reducing flow ganja, contraband and drugs, Bangladesh says Myanmar is new cause of worry 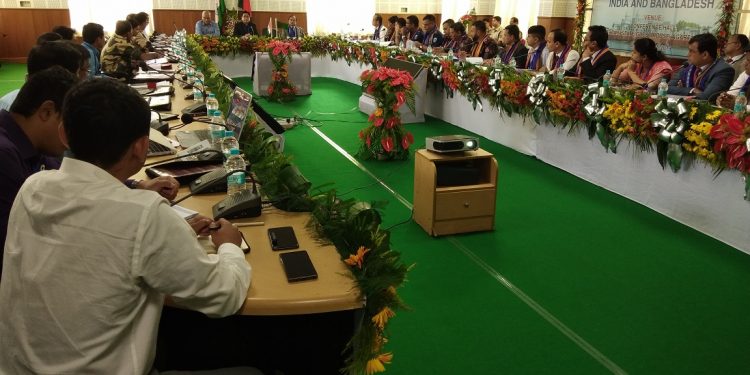 Bangladeshi delegation, comprising district magistrates of Moulvibazar, Rangamati and Khagrachari, met their counterparts of Tripura’s Unakoti, North and Dhalai districts in presence of official of border guards and police from these districts and jointly resolved to curb these problems.

Bangladesh team appreciated the role of India, especially Tripura, in reducing the flow of ganja, contraband and drugs but expressed concern over increasing smuggling of Myanmar made Yuba tablets through Indian territory.

Islam said, “Flow of drugs from India is reducing at present but we are very much worried about the entering of Myanmar contraband into our territory. On regular basis Bangladesh Border Guards (BGB), Rapid Action Battalion (RAB) and Police provide us reports on narcotics haul.”

Meantime, Lieutenant Colonel Mohiuddin, Commanding Officer BGB 7th Battalion said even though drug flow along Indo-Bangla border had slowed down, the problem would persist unless joint action was taken against the kingpins operating drug cartels.

The BGB official said, “There are drug kingpins in both Bangladesh and India and they need to be curbed by the internal security agencies because the border guards on both sides are always on high alert. The border is porous and every inch of the border cannot be guarded by men so, action should be taken against the kingpins.”

The India team leader Jamatia viewed that such discussions are of great help in further improving the relation between the two nations as it also help to grow personal rapport among the ground level official.

He said that other issues including border fencing, maintenance of border pillars, joint patrolling of the Border Security Force and Border Guards Bangladesh (BGB) and setting up of more ‘border haats’ (markets) were also discussed.