Sabina Mumtaz Islam, an accomplished singer of Assam is all set to enthrall the connoisseurs of music on June 30 next in Guwahati.

Sabina is having a performance at ‘Surangan’ – A Festival of Music at Sangeet Natak Akademi in Beltola of Guwahati on that day. 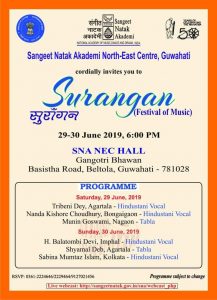 She has been recently selected as an empaneled artist of Indian council for Cultural Relation (ICCR), Government of India.

Sabina was also recently elevated to grade ‘A’ artiste of All India Radio in the category of Thumri/Dadra/Tappa etc.

Music has been an appetizer to her since her childhood days. Born in a cultured family in Guwahati, Sabina’s remarkable musical journey was set off by her father Shri Nurul Islam.

At a tender age of 10 years, she won the first prize in All Assam Music Compitition in her home town itself. Later, while obtaining bachelors degree in literature from Cotton College, and Diploma in Tourism and Computer Science, she simultaneously enriched herself musically.

In the year 1988, she became ‘Sangeet Visharad’ from Bhatkhande Sangeet Vidyapeeth under the tuteledge of Damodar Bora.

She later came under the tutelage of Vidushi Subhra Guha, the doyen of the same Gharana, acquiring the prestigious scholarship in 1999.

Sabina had been a scholar at ITC SRA for five years, where from she has undergone rigorous training from her guru in the famous guru-shishya tradition and for the last 21 years she still continues to do so.

Sabina has now blossomed into a full-fledged performer and performs nationally as well as across the globe. She is a full time performer in All India Radio and Doordarshan.

Apart from this, she also delivers performances in various television channels regularly. She also playbacked in the Bengali debut film ‘Har Har Byomkesh’.

Sabina has the priviledge of performing in major cities across India like Delhi, Mumbai, Bangaluru, Vadodra, Amritsar, Allahabad, Pondicherry, Banasas and the likes.

Even her recitals reached far and wide including foreign countries like the United States and to Bangladesh.

She has earned numerous awards between 2003 and 2005. Among them the most exceptionals are the ‘Young Artist Award’ under EZCC and the Jnana Pravaha fellowship for being an astoundingly promising musician.

She achieved a gold medal too from the Ministry of Tourism and Culture, Government of India.

Even in western countries she showcased her versatility with spectacular success. From 2006 to 2009 she had been a regular visitor to USA. Sabina solely represented North Indian Classical Music in World Music Festival ‘Navaratri’ in Wesleyan University, Connecticut which was one of her remarkable achievements.