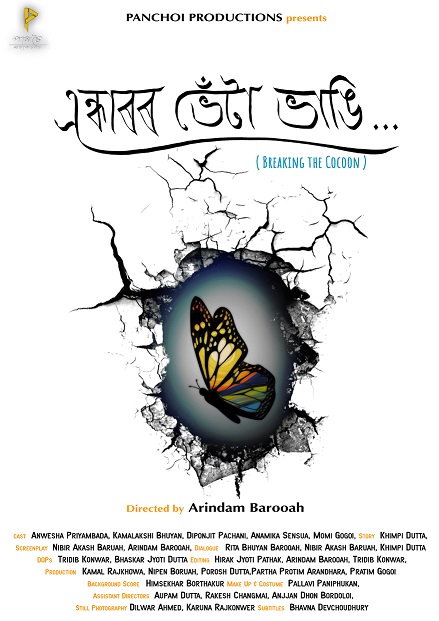 The poster of the movie

The short film, ‘Endharor Bheta Bhangi…(Breaking the Cocoon)’ directed by an Assamese filmmaker Arindam Barooah has been released online.

The film has already been recognized in and outside India in several film festivals.

Barooah, who hails from Duliajan, the industrial town of Dibrugarh district in eastern Assam, presently resides in Mumbai pursuing his dreams of film making.

The short film has already earned recognition and accolades in in around 15 film festivals, both within the country and abroad.

The short film is based on women empowerment where the story is about a girl whose grandmother breaks age old gender based stereotypes and sets an example for others.

Directed by Barooah, the story of the movie is written by Khimpi Dutta, while Nibir Akash Baruah collaborated with Arindam Barooah in penning the screenplay.

The dialogues have been rendered by Rita Bhuyan Barooah, Nibir Akash Baruah and Khimpi Dutta.

Tridib Konwar and Bhaskar Jyoti Dutta handled the cinematography, while, editing was taken care of by Hirak Jyoti Pathak, Tridib Konwar along with Arindam Barooah,

Some of the awards that the short film has bagged include bronze medal at Virgin Spring Cinefest 2018 in Kolkata; second runner-up at International Children’s Film Festival of Jaipur; Special Festival Mention at sixth Indian Cine Film Festival-18, Mumbai, India among others.

To watch the movie, one can go this link: