Man-elephant conflict continues unabated in the hills of Karbi Anglong of Assam.

If villagers are rendered homeless in some areas, wild elephants are creating havoc by destroying the rice grain stocks at some other place or ravaging the harvest at a different place.

The havoc created by wild pachyderms has increased many fold after the tragic incident at Hawaipur in Hojai district where as many as five elephants were mowed down by a passenger train.

A large area of the region has turned into a hunting ground for these wild elephants who seem to be in a fit of revenge unleashing terror never before seen in the area. 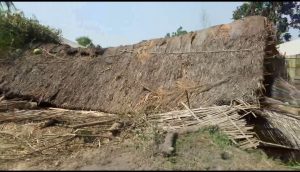 arbi Anglong has been giving sleepless nights to the locals for the fifteen days or so.

The herd of wild elephants are not only destroying the residential houses of the villagers, but also ravaging the stocks of fresh harvest apart from destroying the crops.

The wild elephants are also raving to ground several banana trees, bettle-nut trees and other plantations and vegetation.

In one word, a reign of terror prevails in the entire region with the locals on their toes with the advent of darkness every passing day.

The scene was no different on Monday night, when a herd of around 50-60 wild elephants ravaged several houses at the area. A family of seven members whose house was ravaged to ground had a miraculous escape at the intervention of the villagers and forest officials who had managed to drive away the herd of wild elephants.