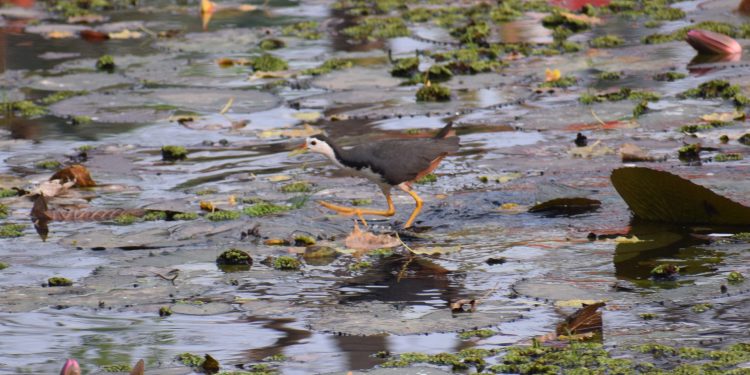 World Wetland Day on February 2 marks the date of the adoption of the Convention on Wetlands in the Iranian city of Ramsar in 1971.

Every year the world observes the day with a different theme emphasizing on the urgency to preserve the unique ecosystems.

This year the theme for the celebration of the day has been carefully chosen as – ‘Wetland and biodiversity’ keeping in focus the vulnerable ecosystems that provide water and habitat for a diverse range of plants and animals and therefore richest among all ecosystems.

Freshwater wetlands are a repository of biodiversity.

The role of wetlands is enormous in maintaining environmental quality, control of floods, groundwater recharge and livelihood support.

Apart from rivers, wetlands are a major water-based ecosystem.

The Brahmaputra valley in Assam has been blessed with innumerable freshwater lakes (locally called beels), or ox-bow lakes (era suti), marshy tracts and thousands of ponds and tanks to hold the excessive rainfall the State experiences.

These wetlands are vital to our water needs and food production.

Besides, these serve as the habitat for thousands of species of flora and fauna.

Climate change and degradation of wetlands

However, many of these wetlands are fast disappearing.

Most rapid has been the decline in natural wetlands.

No existence could be found of more than 50 wetlands in recent surveys in the state either due to conversion of these wetlands for other activities or due to climate change impacts.

Climate change poses a threat to all ecosystems.

The wetland ecosystem is the most vulnerable because wetlands are the least protected ecosystems.

Many Asian waterfowls are now on the brink of danger due to degradation of wetlands.

Destruction of habitats and loss of nesting sites have left many of the migratory birds to change route or destination altogether.

Climate change has added to the loss of habitat for many swampy birds.

With rising temperatures, water bodies are drying up.

With the increase in temperature, evaporation also increases that leads to depletion of surface water level resulting in depletion of aquatic life and vegetation cover.

Degrading habitats as a result of climate change may become a critical component in the health of many megaherbivores like the rhino, elephant or Asiatic water buffalo, experts warn.

They need to wallow in mud and water to cool off.

Siltation is another major cause of the loss of wetlands.

Heavy siltation every year after the floods is adding to this woe.

Due to heavy siltation, many wetlands have changed to grassland and woodland.

Therefore, monitoring of land cover has become the utmost priority for the management of the protected areas.

Wetland mapping is the first step to monitoring this important part of the ecosystem.

Mapping of wetlands using a geospatial tool can be done accurately at minimal costs and manpower used.

Monitoring at multiple spatial and temporal scales, support better understanding of the ecosystem for continuous assessment and analysis of future trends.

Poor governance continues to be another cause for the loss of important wetlands in the State.

“There has been a rapid conversion of water bodies to other users and their function in a wider economic sense has largely been ignored. Wetlands act as important repositories of aquatic biodiversity. In Assam, there is an appalling lack of awareness among the masses about the functions and significance of these crucial components of the ecosystem,” said Dr Pradip Sharma, chief editor of the book Harnessing Wetlands for Sustainable Livelihood.

Since the 1970s, the benefits and value of the world’s wetlands are increasingly receiving due attention.

The important role of wetlands in combating land degradation was highlighted at the Conference of Parties (COP14) to the United Nations Convention to Combat Desertification (UNCCD) in New Delhi last year.

The Union Ministry of Environment has emphasized the critical role of these unique ecosystems in realizing the government’s scheme of Har Ghar Main Jal that focuses not only on bringing water to households but also on source protection and revival of wetlands.

Plans have been afoot to identify and classify wetlands and regularly monitor them by preparing wetland health cards.

India got her first rules on wetland conservation in 2010 which were revised in 2017.

As per the Wetlands (Conservation and Management) Rules, 2017 states have now State Wetland Authority (SWA).

SWA needs to prepare a list of all notified wetlands and those to be notified and have a digital inventory.

“The State governments need to prepare a wetland inventory within their jurisdiction but here, in Assam, required leadership of state government not emerging,” said Moloy Baruah of Early Birds—an environmental NGO.

Rooted in the role of wetlands as ‘biodiversity hotspots’ for migratory birds, in our country conservation plans have largely been dominated by protected area-based approaches.

But there are vast swathes under periodic use by migratory species that fall outside protected areas.

Identification and delineation of such areas need to be done on an urgent footing along with periodic monitoring of the physical status of the wetlands in protected areas.

Wetlands need to be protected for their unique biodiversity.

If properly managed, wetlands are going to be a source of immense wealth for this state leading also to enrichment of the quality of its environment.