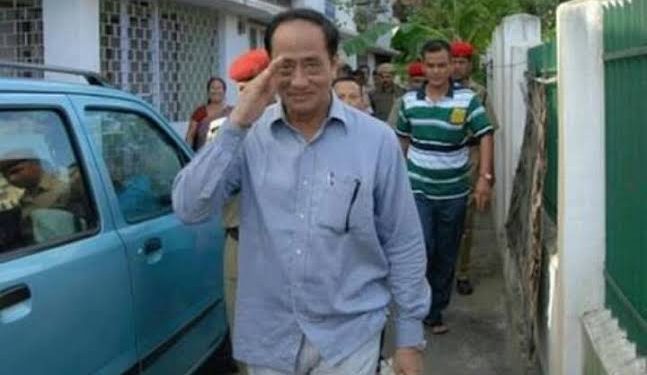 Rajkumar Meghen alias Sanaiyama, chairman of the separatist United National Liberation Front (UNLF), has been released from jail after he completed his ten year sentence, a top source close to him said.

He was freed around 5:30 pm from Guwahati Central Jail on Saturday, a day ahead of the scheduled date, amid great secrecy, jail officials confirmed to Northeast Now.

Family sources said he is likely to arrive in Imphal by Monday, where he will be accorded a grand reception – though it was not clear by whom.

They said he may visit and pay floral tribute in front of Kangla Utara.

R K Meghen was first reported to have been abducted by Bangladeshi intelligence agents on September 29, 2010.

After a BBC news report by its former correspondent Subir Bhaumik about the arrest on October 13, 2010 , the UNLF’s publicity secretary Ksh Yoiheiba accused the Sheikh Hasina government of trying to please India and demanded to know the whereabouts of the UNLF chairman.

Later, the NIA showed him arrested on the Bihar-Nepal border and implicated him in a case along with some others arrested by Assam Police.

The NIA took charge of the case in September 9, 2010 on orders from the Home Ministry.

NIA had submitted an additional charge sheet which consisted of 4,000 pages implicating the arrested persons on several charges.

However, the judge ruled that ‘it appeared that indeed there was no conclusive proof that the accused committed any terrorist act’.

The Court observed that there was no circumstance on record to show that any specific terrorist act was committed on the direction of the leadership of the UNLF and they cannot be charged as terrorists under section 16 of the UA (P) Act.

Some of the under-trial prisoners sought bail for various reasons but Meghen did not apply for bail and remained in Guwahati Central Jail.

Neither did he back off from the UNLF denand of a plebiscite in Manipur, unlike the pro-talk ULFA leaders like Arabinda Rajkhowa who climbed down from their separatist stance to start negotiations with the Centre.

However, the rebel leader got remission of some months of his sentence for his contribution in setting up a library, a music school for the inmates and construction of a rock garden inside the Guwahati Central Jail premises.

The UNLF was raised in 1964 to fight for Manipur’s independence.