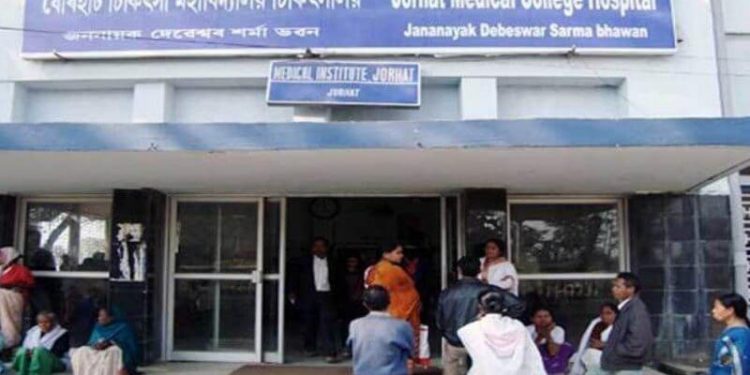 Assam health department on Monday suffered a setback in the fight against Covid-19 as two doctors of Jorhat Medical College and Hospital (JMCH) associated with Covid treatment resigned  citing  “fatigue”,  and “too short  breaks” as reasons.

Dr Priyanka Changmai, assistant professor, Medicine department told Northeast Now that the breaks between duties were too short, being only three to four days before she was called on to do duty for another 10 days.

“I did night duty in the Covid patients wards from July 30 to August 8 and then had to stay in the hotel for another seven days before my RT-PCR results for Covid 19 was given.

“I came home to my family which includes two children, one four and the other six, on August 15 and had hardly spent four days with them when I got a message in the WhatsApp group that I was again on duty from August 19 night. This message I saw on August 20 and on August 21 I tendered my resignation, asking for immediate release, “Dr Changmai said.

She further said that had she been told or the matter discussed with her beforehand she might have worked out something instead of this extreme step at an hour like this, but now it could not be helped.

“I had done this kind of duty in June as well and being a woman with two kids, it is not possible to stay away for 17 days at a stretch and meeting them only for four days in between these stretches,” said the physician.

The other doctor, Dr Shankarjyoti Parashar, assistant professor, Pulmonary Medicine and Chest, had stated ”personal reason” in his resignation letter but later told reporters that he had felt fatigued.

“We had told the authorities about this but they did not pay heed to our words. There is so much of mental and physical harassment that a doctor cannot take,” he said.

He too had resigned about five days ago.

“I have been working like this since March, often taking training sessions, and it was not possible to take this anymore,” he said.

Dr Atul Baro, who was in charge Principal and chief superintendent of JMCH at that time when both the doctors had resigned told Northeast Now that the Medicine department was slightly short staffed.

“We were trying to resolve the issue when the resignations came in. I have informed Gauhati and they will be sending more doctors here,” Dr Baro said.

Replying to the query as to why doctors from other departments had not been roped in, Dr Baro said that Medicine specialists were required for Covid treatment.