A Touch of Time: Poetry of Time and Timelessness

I don’t know for how many years I know Harekrishna Deka. It happens with some people. It is difficult to trace your first meeting with them. May be I saw him first, from a distance, many years ago at the courtyard of Lakhiram Barua Sadan, when he was about to come out from his white ambassador, surrounded by sentries,  clad in an off-white shirt and grey trousers!

May be not, may be that was just an image from one of his poems. I didn’t know that HKD could write so effortlessly in English! My first encounter with his English prose was in September 2004 at Sahitya Akademy, New Delhi. I went there to meet Dr. Nirmalkanti Bhattacharya, at the time editor, Indian Literature. As Dr. Bhattacharya was in a meeting, I had to wait for him in the anteroom.

There, while leafing through an old copy of Indian Literature, I noticed an essay by HKD on Nirmalprabha Bordoloi!? What an accomplished piece of writing! Oblivion of the meeting, I read it to my heart’s content.

When Nilmoni Phukan has stopped writing poetry, HKD is the most eminent living poet in Assam today. ‘A Touch of Time’ is his first collection of poems in English. HKD is a poet of modern sensibility and his poetry is many faceted and layered in critical thinking. 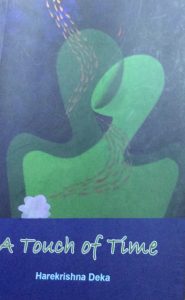 Is it possible to write poetry today without critical faculty? It is not only poetry, one will not be able to engage in any creative field if he doesn’t possess a discerning mind and can’t respond to the concerns of his time. Without this his creative effort will be stale and out of place.

Let us look at some of the poems included in ‘A Touch of Time’ and see how does he charm and goad us to thinking. The first poem in the collection is ‘A Candle Burned’

A candle burned inside

And delicately it shone—-

Along with the light.

How beautifully said- burning while emitting light. The image of a burning candle conveys its meaning simply but deeply. The next poem is ‘A Meeting’. This expresses the political state of the so called Centre and the periphery and the crossroad between.

You didn’t listen to when there was a desperate need to let you know. Now you turned deaf and I also lost my energy to communicate and the crossroad remained uncrossed. The poem ‘After the Quake of Eighty’ is about an imaginary earthquake. But while reading it, the reader will feel as if he is listening to a live description of a devastating earthquake.

The images are so vivid and powerful! And the natural devastation knows no discrimination –

But I could see

Amidst the fresh silts

Was this Toshen Pandit? / Or Babul Roy?

What about the poem, ‘An Anecdote’? Is it an anecdote of a day or a pinprick of everyday? The poet is apparently happy, but the burden of conscience weighs heavy on him all the time. I call the poem ‘Anniversary’ a poem of haiku sensibility.

One can first read this poem for its rhythm and beauty, then turn to its meaning.

We sat among the fallen leaves,

And when the barren branches

Were baring their nakedness to the sky

We were baring our minds

Then we stepped together.

What does the poem ‘Another Mirror’ says! Mirror reflects images, but it could also reflect the thoughts of a reflecting mind. The poem ‘Can We Meet Tomorrow’ is laden with possibility as Louis Althusser names his autobiography- Future Lasts Forever.

‘Citizen’ is a powerful poem. When inequality bounds, as if to try to fall into a stupor we rush to our comfort zone. ‘The Dream’ is another interesting poem. Everything is possible in a dream, but in it you cannot tell the lies of a waking life. The poem ‘In This Mirror’ is about unreal reality- breaking images and shades-what do they mean and explain?

What I see in this mirror?

Am I watching you or you are watching me?

When time cracks the mirror,

There are two faces in two halves

Which is who I or you?

Or are they identical?

In each piece there is a face.….

Here the image of a long train whistle splintering the mirror is surreal – a sound breaking an object! But, why?  Aren’t they both two different forms of the same matter? You can read so many meanings in HKD’s poetry! ‘Is Time An Arrow?’ is a philosophical metaphor- the essence of everything. So beautiful a poem it is! Then, look at the poem ‘It Matters’

Yet it is not wasted

A flicker in her eyes which may have a profound sentence

Only he may not see if his eyes have no light.

You don’t know a simple flicker may convey so many things, could be so eloquent if it is caught at the right moment and understood properly! While the poem ‘Looking at my old photograph’ depicts the dichotomy between the mind and the body, it also explains the metamorphosis of both in course of time.

‘Mother’ is another touchy poem. ‘My shadow’ is an amazing riddle and so well constructed a piece of poetry! The poem ‘On My Morning Walk’ is printed on two pages facing each other in the book. The verso is all about civility and gaiety and the recto is about the indifference of modern life.

The poem ‘Salt’ sounds as if it is joke, but it has serious suggestions too. The ‘Stones’ tell stories and histories, but the moment they are touched and picked up by humans for their use, they no longer remain stones, they lose their pristine character and storytelling nature.

As soon as the men touch the stones

They will no longer be stones.

The poem ‘Truths’ is a jugglery of word and a postmodern interpretation of truths. Truths are splintered. But then there is a larger picture too. HKD doesn’t ignore the small truths, but at the same time strives for the larger picture.

In his poetry, he mixes myths and legends with modernity and creates a harmonious montage. Though they are loaded with ideas and meanings yet there is joy and gaiety in abundance in his poetry. There is time and timelessness in them. And HKD does not want to sit on the top of an ivory tower, but wishes to communicate with his readers. So he uses malleable words in his poetry which are often open to multiple interpretations.

China plants its 5-starred red national flag on the Moon