Prime Minister Narendra Modi’s slogan #VocalForLocal does not hold good for people when it comes to supporting local cement producers in Northeast India.

A survey by Team Northeast Now on Monday in Guwahati revealed that people in the city now prefer to buy cement bags of the national brands like the ACC, Birla Gold, India Cements and Duraguard.

It is not that people in Guwahati have any specific objection against the local brands like Topcem Cement, Star Cement or the Amrit Cement.

UltraTech Cement Limited, which is the largest cement producer in India, is fast getting popular in Guwahati not only because of its brand image and quality, but primarily for its competitive price.

A product of the Indian multinational conglomerate, Aditya Birla Group, Ultratech Cement is sold in Guwahati’s retail market between Rs 385 to 395. 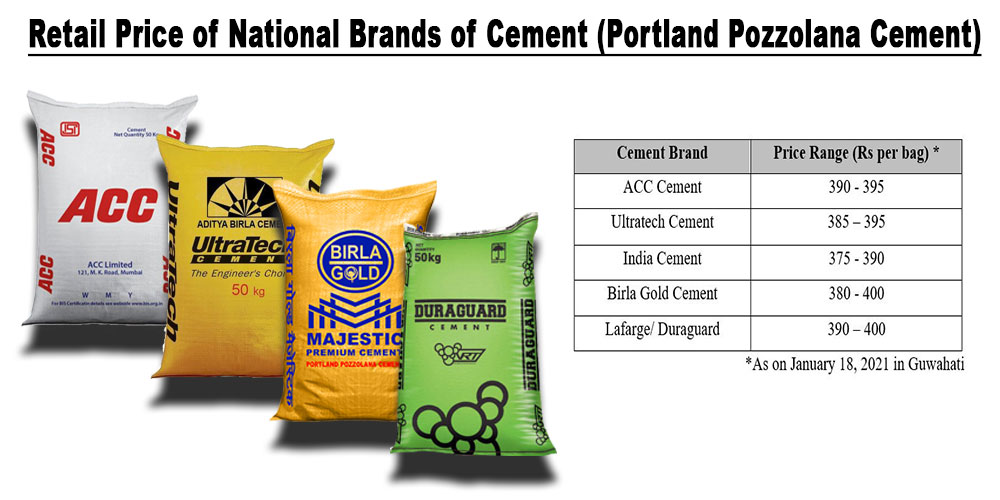 ACC Limited, which is one of the largest and oldest producers of cement in India, sells at Rs 390 to 395 in the retail market in Guwahati. ACC was established in Mumbai in August 1936, and is now a subsidiary of Lafarge Holcim.

India Cements Limited, which is headed by former ICC chairman N. Srinivasan, sells cement at Rs 370 to 390 in the retail market in Guwahati. 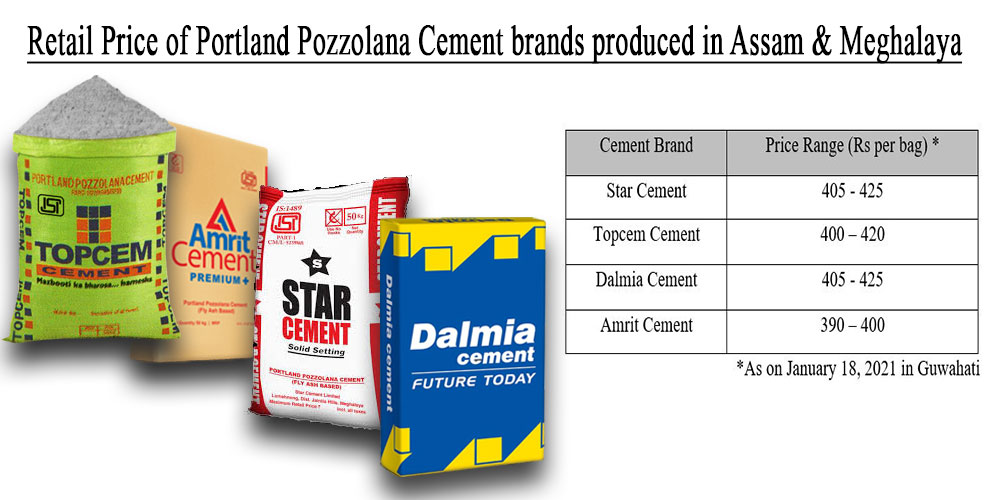 Surprisingly, the average retail price of cement brands like Topcem, Star, Amrit and Dalmia, which are produced in Assam and Meghalaya, were found to be much higher than the national brands in the Guwahati market.

Retail price of Topcem Cement on Monday in Guwahati was found to be between Rs 400 and 420, while Star Cement bags ranged between Rs 405 and 425.

Amrit Cement bags were sold between Rs 390 and 400. Though Dalmia Cement is a national brand, it has production units in Assam and Meghalaya, and it sold between Rs 405 and 425 on Monday in Guwahati.

While customers in Guwahati market are now shying away from the local cement brands like Topcem, Star and Amrit, it is surprising as to how the national cement brands sell at such competitive prices in the Guwahati retail market.

All the national cement brands like the ACC, Birla Gold, India Cements and Duraguard have their production units in West Bengal, Jharkhand, Chhattisgarh and beyond, and transport cement in railway rakes to Assam, and still sell the cement at a cheaper prices.

On the other hand, Topcem Cement, Star Cement, Amrit Cement and the other local companies have production units in Meghalaya and Assam, and enjoyed benefits under the North East Industrial & Investment Promotion Policy (NEIIPP), and are still selling at a higher price in the Guwahati market.

While there is total ambiguity in the pricing system of cement brands of Topcem, Star, Amrit and other local brands in Northeast India, the allegations of a nefarious ‘syndicate’ indulging in rampant ‘cartelisation’ to ‘manipulate’ cement market has started to prove true.

Pranab Kumar Sarma, president of Assam Real Estate and Infrastructure Developers’ Association (AREIDA) had said that a nefarious ‘cement syndicate’ is all out to ‘loot’ customers in Assam and the other states in the region.

The AREIDA had filed a case with the Competition Commission of India (CCI) on September 2, 2016 alleging that three companies — Topcem Cement, Star Cement and Dalmia Cement have been leading the nefarious syndicate.

After a preliminary inquiry, the CCI had registered a case (No. 77/2016) against Topcem Cement and the two other companies, under Section 19 (1) (a) of the Competitions Act 2002, for violation of Sections 3 and 4 of the Act.

Sarma had said it was unfortunate that the ‘cement syndicate’ is looting the customers, including the real estate developers in Assam and the other states in the region.

It was also reported that Topcem Cement, which ‘exploits’ limestone reserves of East Jaintia hills in Meghalaya has been ‘looting’ the tribal Khasi and Jaintia customers.

Topcem Cement has been selling cement in Meghalaya at a ‘higher price’ in comparison to the retail price in Assam. Retail price of the brand is Rs 40 to 60 higher in Meghalaya than in Assam.

Anil Kapur, president of Topcem Cement, when contacted, said the price difference is primarily because the national cement brands are offering huge discounts to the customers through the dealers in Assam.

“The national brands are offering huge discounts to get an entry into the market in Assam,” Kapur said, adding that local companies, including Topcem Cement, are also offering discounts these days.