Students of Nilbagan Model Higher Secondary School in Hojai brought laurels to their school in the one-day District School Sports Competition held on Tuesday at the Police Reserve Playground in Nagaon. 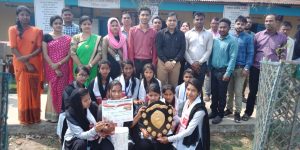 Students of Nilbagan Model Higher Secondary School won three events in the competition out of eight events. The school administration felicitated the winning students on Wednesday in recognition to their best performance in the competition.