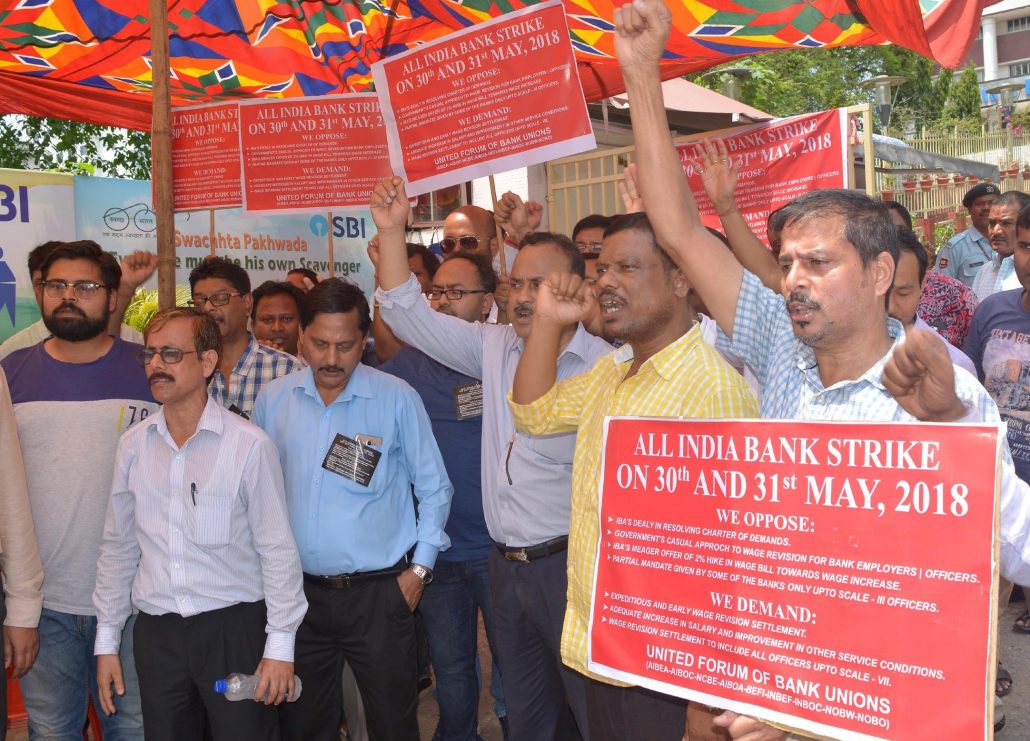 Banking operations continue to be badly affected in Tripura, Assam and other northeastern states for the second consecutive day on Thursday as most branches of major banks remained closed due to a nation-wide employees’ strike.

Many branches of the private banks remained closed on Wednesday and Thursday due to the pressure of the agitating bank employees’ organisations. Leaders of the striking employees claimed that the response of the bank strike is tremendous in all northeastern states.

Currencies in most of the ATMs (Automated Teller Machines) were exhausted, causing huge problems for the people specially those from the trading communities.

The agitating employees were holding demonstrations in front of their bank branches protesting the “anti-people banking reforms” and demanding for wage revision in the wake of the proposal for a two per cent hike in salary.

“The bank employees’ organisations have been demanding early wage review settlement, sufficient raise in salary and improvement in other service conditions and wage revision settlement for all officers up to Scale 7,” he told the media.

All India Bank Officers Confideration Tripura state Secretary Sanjay Datta also echoed the views of Modak. The employees of Tripura Gramin Bank and Tripura Cooperative Bank are not participating in the two-day strike.

The United Forum of Bank Unions (UFBU) — the umbrella organisation of nine employees’ unions and four officers’ associations — had called the strike after its talks with the IBA in New Delhi failed.

NCBE leader Modak said, “The bank strike is not for the interest of the employees alone… the strike is to protest policies of the central government and to protect the Indian banks from foreign controls.”

The banking employees have also been protesting the outsourcing of non-core activities by the authorities. Government and foreign exchange transactions were also affected due to the shutdown.

“Due to the bank strike, lakhs of employees are unable to withdraw their salaries through ATMs and most of the machines have exhausted money,” Tripura government official Dibyendu Sekhar Datta said.