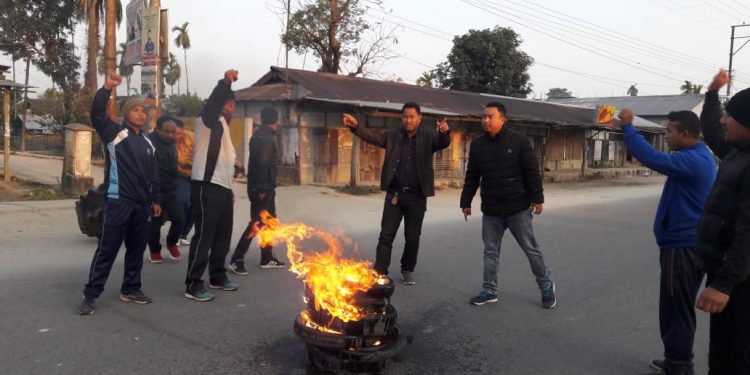 The 12 hours state-wide bandh called by the  (CCTOA) Coordination Committee of the Tribal Organizations of Assam, brought Bodoland Territorial Council(BTC) headquarter Kokrajhar to a standstill.

The CCTOA is a joint platform of various indigenous communities, who called the bandh in protest against government move to grant Scheduled Tribe (ST) status to six advanced communities of Assam.

In a statement issued to the media, the Coordination Committee of the Tribal Organizations, Assam alleged that the move to accord ST status to six ethnic groups – Ahoms, Marans, Muttocks, Chutiyas, Koch-Rajbongshis and Tea Communities, is nothing but ‘a plot’ of the Central and State Governments to ‘eliminate the genuine tribal people’ of the State.

The bandh which started 5 am on Friday, saw total response with business establishment like markets, banks remaining closed. Vehicles remained off the roads.

The bandh supporters burned tyres in many places.

Essential activities like medical, exams were exempted from the purview of bandh.