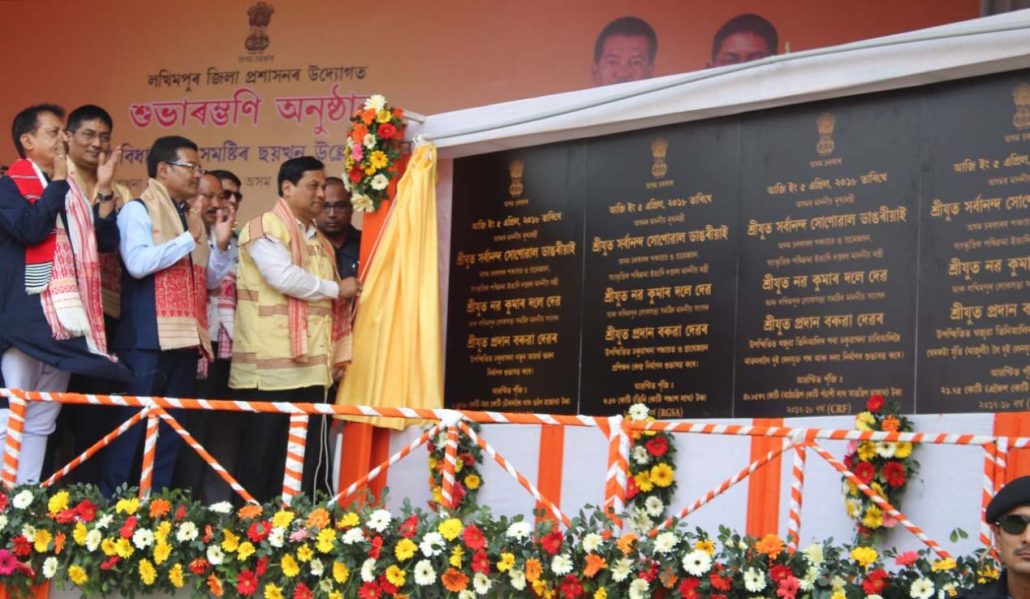 Sonowal also laid the foundation of a circuit house in Dhakuakhana, distributed cheques to the beneficiaries of Kanaklata Mahila Sabalikaran Achoni at a function held at Dhakuakhana playground on Thursday.

He also said that both the State budgets prepared by the present State government made elaborate proposals and financial outlay for the welfare and equi-development of all people belonging to all castes, communities and ethnicities.

Lamenting the sluggish growth of north bank areas of the Brahmaputra, Barak Valley and three hill districts even after 70 years of independence, Sonowal said that the present State government after coming to power has drawn a distinct roadmap for the balanced development of all areas of the state.

Chief Minister Sonowal also said that for the all-round development of the State, his government has decided to set up a Medical College in Lakhimpur, a Centre for Indian Council of Agricultural Research at Gogamukh, a Cultural University at Majuli, a Sports University at Chabua, Dr Bhupen Hazarika Sammanaya Kshetra at Sadiya, an Engineering College in Dhemaji, a Cancer Hospital in Lakhimpur.

Putting a never before emphasis on the development of connectivity in the State, Sonowal said that dedicating the Dhola-Sadiya bridge to the public, his government with the help of the Centre is on its toes to inaugurate Bogibeel Bridge this year itself. The new bridge would revolutionise connectivity between the North Bank and South Bank of the Brahmaputra.

Giving a snapshot of all the good works of the present State government, Chief Minister Sonowal said that under the present dispensation, employment avenues for 45 thousand youths of the state have been created. He also said that the employments were made transparently without any favour to anybody which rarely happened in the State before. He at the same time appealed to the students to work hard and get a competitive edge to achieve success in life.

Sonowal also informed that all the vacancies in the government sector will be filled up and asked the youth to take advantage of that. Making a special mention of Podumoni and Basudev Than and Phat Bihu, Sonowal said that his government would take special steps for popularising these places including Phat Bihu to make Dhakuakhana an attractive tourist destination. Synchronising with the event Sonowal also laid the foundation stone of a SIRD training centre at Dhakuakhana.

Speaking on the occasion Panchayat and Rural Development Minister Naba Kumar Doley said that his ministry with the active support of the Chief Minister has been taking several steps for the creation of infrastructure in the state. He said the newly launched Kanaklata Mahila Sabalikaran Achoni in the state has vowed to empower more than one lakh women self-help groups with the special financial benefits.

Member of Parliament Pradan Barua, MLA Debananda Hazarika, Chief Executive Member of Mising Autonomous Council Sunil Pegu and a host of other dignitaries were present on the occasion.