Most of the embankments have become vulnerable due to expiry of the design period, says CM 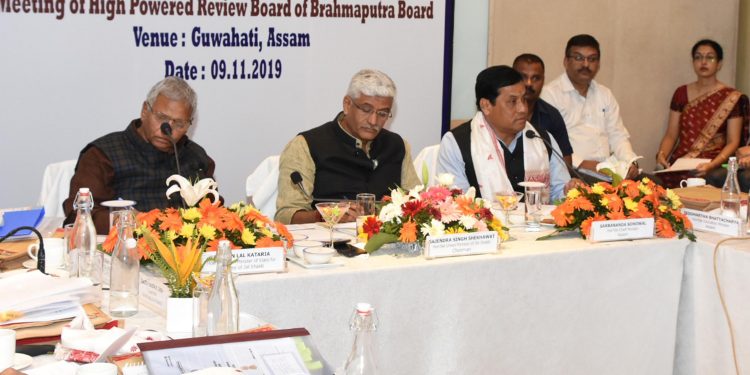 Assam CM Sarbananda Sonowal speaking at the meeting in Guwahati on Saturday.

Assam chief minister Sarbananda Sonowal on Saturday urged the Centre to take up a special programme for flood and erosion management in Assam.

“The State government constructed nearly 4,474 km of embankments since 1954. Most of the embankments have become vulnerable due to expiry of the design period,” he said.

Stating that river erosion in Assam is of serious magnitude, Sonowal said that the State has already lost several hectares plain land together with loss of many public and private infrastructures.

He said erosion is also systematically destroying the chain of embankments, which provide relief from annual floods.

He also sought support from the Jal Shakti ministry for inclusion of erosion in the admissible list of calamities for assistance under NDRF and SDRF.

He said the matter has already been taken up with the home ministry.

Sonowal said as per direction of Prime Minister Narendra Modi, a high level committee for proper management of water resources in Northeast was constituted for evolving an integrated flood management strategy.

The chief minister also underlined need for taking up scientific and corrective dredging of Brahmaputra, Barak and their tributaries in a time bound manner for effective erosion management.

He also underlined the need for sharing hydro-meteorological data, adopting latest technique of data analysis and flood early warning system and requested the ministry to take steps for constitution of North East Data Centre at Guwahati.

Sonowal further requested to revive the flood management programme and release the balance central share of the FMP schemes which were already taken up in the State.