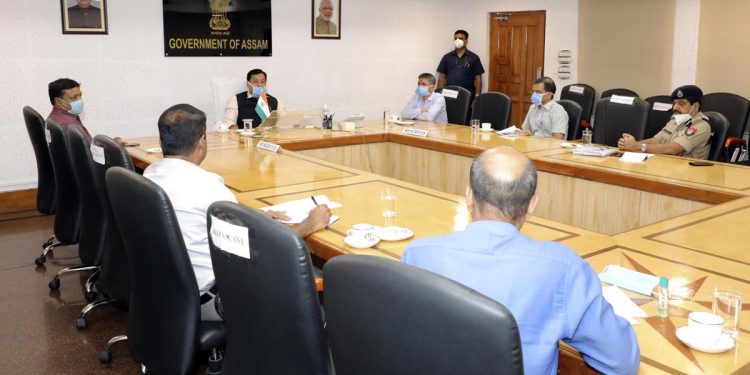 Assam CM Sarbananda Sonowal in a meeting to review the fire breakout incident at Janata Bhawan at his office on Tuesday.

The directive from chief minister Sonowal comes as he reviewed the fire incident that broke out in Block-B of the Assam Secretariat, also known as Janata Bhawan on Tuesday night.

The review meeting was held at the CM’s office conference room in the city.

The chief minister directed the officials to set up a 24×7 control room at Janata Bhawan to deal with emergency situations like fire and install one way or single-pole electrical switch in each of the blocks of the Assam Secretariat.

During the meeting, the chief minister asked the officials to expeditiously install CCTV at Janata Bhawan campus, early completion of electrical audit of the buildings and reduction of files.

He also asked the officials to develop a mechanism for disposal of old files that are piled up in different departments for several years.

The chief minister directed to take steps for augmenting skills of the security and monitoring staff working at Janata Bhawan and review their performance every three months.

The chief minister further instructed the fire & emergency department to keep itself fully prepared with hydraulic trolleys and modern equipments to control fire and other crisis situations in the state.

Sonowal asked the department to hold a meeting with real estate entrepreneurs to sensitize them on the need for installation of modern fire fighting equipments at the private apartment buildings in the city.

Meanwhile, chief secretary Kumar Sanjay Krishna on Wednesday visited the incident site as per direction of the chief minister and took stock of the damages.

The fire broke out on Tuesday at around 9:30 PM.

“An ASI of Assam Police’s Special Branch, Hareswar Das, in association with Additional DCP, Chitren Kumar Gogoi, posted at the security wing of the capital complex doused the fire within five minutes,” the CMO said.

The chief minister appreciated and thanked the police officers for their proactive action.