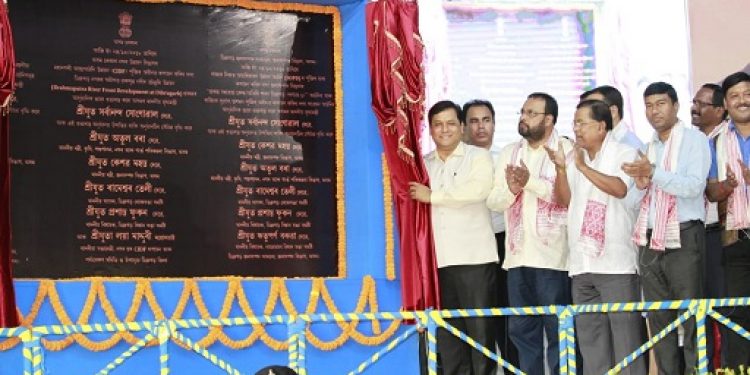 Assam Chief Minister Sarbananda Sonowal laid foundation stone for implementation of Brahmaputra Riverfront Development Project and several other proposed initiatives taken up by the Water Resources and Urban Development Department in a programme held at Dibrugarh town on Wednesday.

Chief Minister Sonowal also centrally launched 103 flood and erosion management schemes proposed to be executed by the Water Resources Department for the State coinciding the programme.

Addressing a gathering on the occasion, Chief Minister Sonowal said that the new development initiatives would lend a major boost to beautification drive of the historic Dibrugarh town and help it in regaining its lost glory as a premier commercial destination of the state.

“The Central and State Governments are taking up numerous projects for strengthening infrastructure and improving other amenities of urban areas in the state. With schemes like Smart City, Smart Police etc, modernization drive of urban areas have received a shot in the arm in recent years,” the Chief Minister said.

Stating that under City Infra Development Fund (CIDF), Rs 200 crore each would be pumped in into six major towns of the state including Dibrugarh for urban infrastructure development, Sonowal added that initiatives under CIDF would give a new lease of life to Dibrugarh town. The Chief Minister also stressed on proper utilization of funds earmarked for the projects.

Moreover, appreciating the Water Resources Department for taking up timely steps for implementation of flood and erosion works through launching of 103 schemes on a single day for the entire state, Sonowal observed that people of the state would be hugely benefitted by the move.

The Chief Minister further said that the State Government following the principle of Prime Minister Narendra Modi’s ‘Sabka Saath, Sabka Vikas’ is unleashing its efforts to ensure equal development of all communities living in the state. He also highlighted several welfare schemes of the government including PMUY, Ayushmaan Bharat, Jan-Dhan Yojana, financial assistance for nutritional supplement towards tea garden pregnant women etc. in his speech.

Water Resources Minister Keshav Mahanta while delivering speech on the occasion underlined the initiatives of the Water Resources Department and proposed projects to be implemented for beautification and infrastructure strengthening of Dibrugarh town.