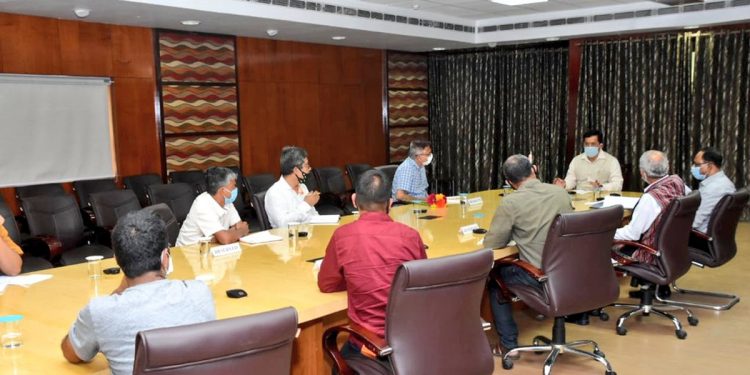 During the meeting, Sonowal said since the state’s economy is agriculture-based, the sector has to be used increasingly to lead the state’s fight to revitalise its economy which bore a dent in view of COVID-19 pandemic.

Chief minister Sonowal informed the delegation that consequent upon the Centre’s advisories, the state government has given relaxations to state’s agricultural activities and therefore, several agri-based economic activities have been resumed amid social distancing norms.

Drawing the attention of the delegation, Sonowal said during the lockdown period, the state has got the opportunity to assess the demand and supply requirement of agriculture products.

Based on the outcome of the assessment, the state government is of the view that there is tremendous demand of the local produce and the state has to capitalise the market opportunity by correspondingly increasing the production and market chain.

He also asked the delegation to motivate the farming community to work sustainably to capture the market of neighbouring states besides the countries like Bhutan, Bangladesh and Myanmar.

Interacting with a group of invitees including farmers, innovators & entrepreneurs in Guwahati, I urged them to join hands with Govt's action plan for revival of economy.

I ensured them that both fiscal & monetary stimulus will be given to boost the economy affected by #COVID19. pic.twitter.com/UJmuSGICUL

Sonowal said there is possibility that around 4.5 lakh youths of Assam would come back to their state from different states after the lockdown.

So there should be a concerted effort on the part of the agri-preneurs and animal entrepreneurs to motive them to agriculture so that the economy of the state can be revitalised.

The chief minister also stressed on starting a survey in the state to do a mapping of the strong points of agriculture and make the state’s agriculture sector self-reliance in line with Vietnam.