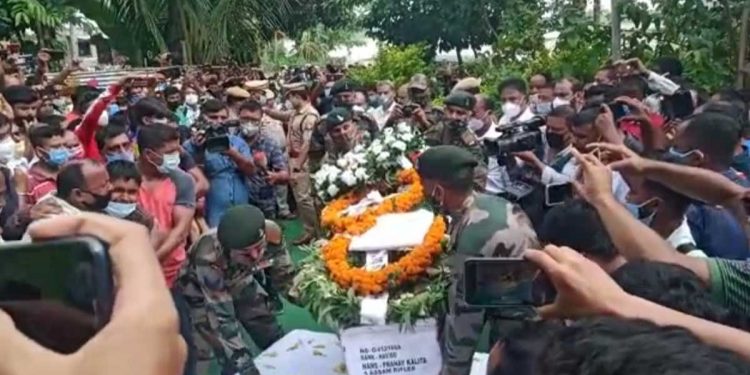 A pall of gloom descended at Ghatbar Saderi village near Pathsala town of Bajali subdivision in Assam’s Barpeta district as the last rites of martyred Assam Rifles jawan Pranay Kalita was carried out with full state honours.

Heart-rending scenes were witnessed at the house of the martyred soldier where the grief-stricken relatives, including his wife and two children, were wailing at his untimely demise.

The mortal remains of the martyr were brought to his residence on Friday and people gathered in large numbers to pay their last respects to the slain soldier.

The body reached Kalita’s native village on Friday at around 3 pm. The funeral was performed complete state honours.

As per reports, four Assam Rifles personnel were killed and five others injured in an ambush in Manipur’s Chandel district near the Indo-Myanmar border on Wednesday.

A patrol party of Assam Rifles was ambushed by suspected militants by triggering an IED explosion followed by firing at Khongtal area under Chakpikarong police station around 6.30 pm on Wednesday.

The three Assam Rifles personnel who were killed in the ambush are Havildar Pranay Kalita, Rifleman Methna Konyak and Rifleman Ratan Sapam.