Situation tense along Assam-Mizoram border, security beefed up on either side 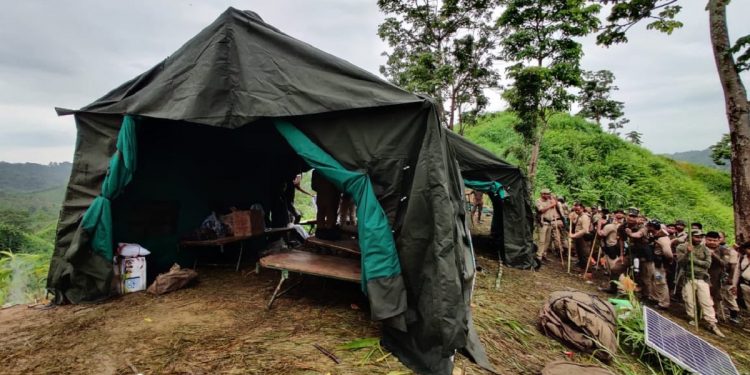 Police personnel along the Assam-Mizoram border

The situation along the Assam-Mizoram border continues to be tense as both states have beefed-up security in the border areas to prevent encroachment from either side.

Mizoram deputy inspector general of police (Northern Range) Lalbiakthanga Khiangte said that the situation is very volatile as both forces might get engaged in armed conflict any time, if one party try to encroach on other’s territory.

He said that both the states have garrisoned their forces on either side of the borders to prevent encroachment.

“Our forces are ready to strike (open fire) any time, if Assam side makes any further encroachment on Mizoram’s territory,” DIG Khiangte, who is currently camping at Vairengte, said.

He denounced the allegation that the Mizos encroached 6 km inside Assam.

“It was Assam, which encroached on the Mizoram territory at Phainuam’s Buarchep village near Vairengte by constructing a road. The land has been occupied by the Mizos for decades,” he said.

The senior police officer also denied that grenades had been hurled towards Assam police by people from Mizoram.

“There was no blast from our side. But we heard some sounds of explosion from Assam side for which we have registered a case as it is believed to be an intimidation to panic the people residing in border villages,” he said.

Reacting to the allegation of hurling grenade at Assam, Khiangte said “It was baseless and just fabricated to gain sympathy from others.”

Earlier, state chief secretary Lalnunmawia Chuaungo had informed the home ministry that the allegations made by Assam that miscreants from Mizoram encroached Assam territory were completely false.

In a letter sent to additional secretary (NE), ministry of home affairs recently, Chuaungo had said that a few farmers of Buarchep village in Mizoram’s Kolasib district were harassed, their crops destroyed and a new road constructed with excavators by Assam police and officials backed by civilians.

The Mizo farmers put up small barricades to protect their lands and crops, which were pulled down and destroyed by Assam officials, he alleged.

On July 12, Mizoram home minister Lalchamliana had demanded compensation from Assam government for the damages it had caused to these farmers.

Though Mizoram was reluctant to be the first to initiate activity, but it will take all measures to protect its territory at any cost, the home minister had said.

Meanwhile, a top home department official said that Assam can’t Mizoram with allegations of encroachment as both the state have different opinion on inter-state boundaries.

While Mizoram accepted the 509 square- mile stretch of the inner-line reserve forest notified in 1875 under the Bengal Eastern Frontier Regulation of 1873 as its actual boundary, the Assam side agreed with the constitutional map drawn in 1933, the official said.

She said that the 1933 map was an imposed boundary as Mizoram wad not consulted and the boundary was not verified by both the states on the ground at the time of drawing the map.

She said that as per the tripartite talks held under the Union home ministry after a flare-up in 2018, both parties agreed to maintain status quo on the disputed areas.

However, Assam has always violated the status quo and erected structures or made activities along the inter-state border, which escalated tension between the two neighbouring states, she said.

“If Assam accuses us of encroaching on its land, we can also accuse it of encroaching on our land as vast tract of the inner line reserve forest are occupied by Assam,” the official said condition of anonymity.

She also said the area where claimed by Assam have been occupied by the Mizos for more than a century.

The present border stand-off took place on June 29 when Assam police allegedly encroached on Aitlang hnar, about 5 km from Vairengte, the nearest village from Assam.

The situation was aggravated on July 10 when Assam police and officials allegedly destroyed plantations at Buarchep village in Phainuam area in Kolasib district by constructing road, the day after chief secretary level-talks under the home ministry ended inconclusive.