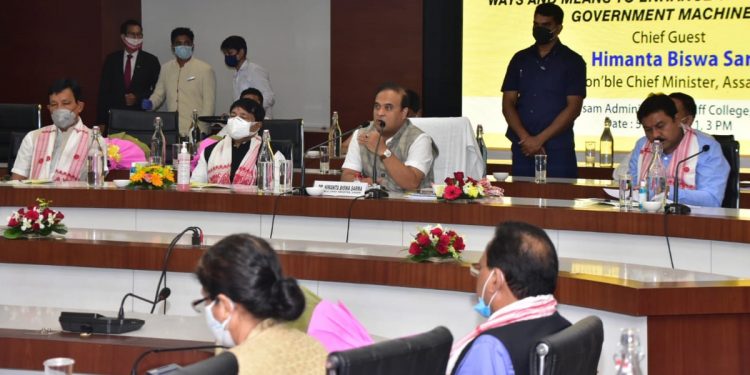 Assam chief minister Himanta Biswa Sarma speaking at the workshop organized for senior government officers on 'Ways and means to enhance the efficiency of government machinery' at Assam Administrative Staff College in Guwahati.

He said this while speaking at a workshop on ‘Ways and means to enhance the efficiency of government machinery’ at Assam Administrative Staff College in Guwahati on Monday.

The chief minister attended the event as the chief guest.

The workshop was organized for the senior government officers starting from the secretary to the chief secretary.

During the workshop, a threadbare discussion took place on matters related to administrative reform, financial reform and implementation of government schemes wherein the ministers shared their experience for timely intervention.

Addressing the senior officers, the Assam CM said, “Democracy is the best form of government and when people get frustrated with the system anarchy prevails which ultimately leads to agitation.”

“Therefore, the government machinery should be very cautious and work with utmost commitment for fulfilling the aspirations of the people,” Sarma said.

The workshop was organized to bring in systematic reform to take the government closer to people and to ensure effective implementation of government schemes, he said.

While outlining the priority of his government, chief minister Sarma said, “Next 5 years should be the beginning of a new era in Assam.”

While performing this duty there should be no delay as delay means denial and citizen should not face any hardship due to negligence of the government servants, the Assam CM added.

The chief minister further said in the performance index, some departments have moved forward from good to better and now it is the time to achieve the best.

Systematic reforms in governance should be the goal, Sarma said with a call for procedural simplification in disposing government matters and urged the officers to do away with the archaic file management system.

The chief minister directed the officials to come up with a roadmap for expeditious disposal of files and bring in a system that effectively eliminates redtapism.

He asked the officers to take necessary steps for framing new rules, if there is any need to ensure speedy disposal of files.

Further in tandem with the vision of the state government to make Assam one of the five best states of the country, the chief minister urged all senior officers to work collectively.

He also stressed on speedy implementation of e-office management system at Janata Bhawan and at district offices along with developing better work environment.