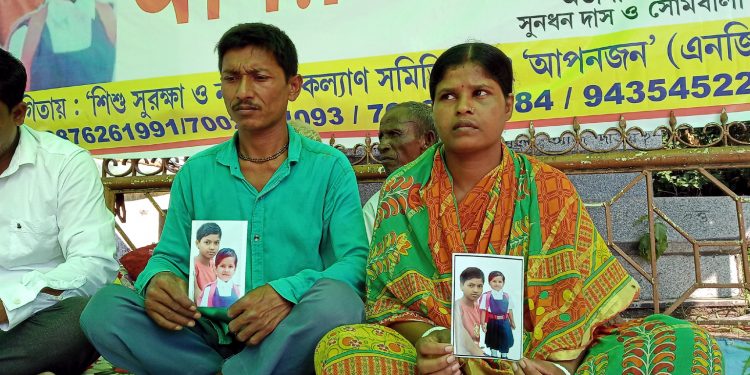 Parents of the missing kids sit for fast unto death in Silchar on Wednesday. Image: Northeast Now

Silchar‘s Sundhan Das and his wife Sombala Das on Wednesday began fast unto death protesting against the police’s failure to find their two children who went missing on June 9 this year.

The members of the two NGOs were seen distributing leaflets to the passersby, urging them to provide information about the two missing kids.

A cash reward of Rs 2 lakhs has also been announced for the person furnishing any information about them.

“We submitted several memorandums, urging the police to trace the kids. But even after five months, they have not been able to find the whereabouts of the duo” Das added.

“In the past, we have seen that a missing child of an associate professor of Assam University was traced within five days with Assam ADGP Assam Mukesh Agarwal leading the operation,” Das added.

“Such an effort, however, has not been shown for the two kids of Sundhan Das, who is a daily wager,” rued Das.

Speaking to Northeast Now, Sundhan Das said, “Our leaders visit the bereaved families, but I have not been that lucky.”

“I have approached Silchar MP Rajdeep Roy on my own. Apart from giving me assurances, he has done nothing much to trace my kids,” Das added.

“We are not going to leave this place until being helped by the district administration in finding my missing kids,” Das reiterated.