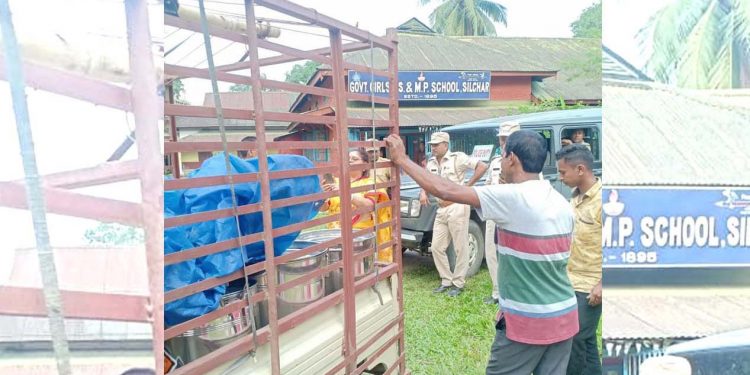 NGO Akriti serves food in a school with the help of police in Silchar on Tuesday. Image credit – Northeast Now

Due to resistance from midday meal workers, NGO Akriti on Tuesday took help of the police to distribute food among school kids in Silchar.

Like other parts of the state, the midday meal workers in Cachar have also opposed the Assam government’s decision to hand over the task of midday meal distribution to NGOs.

On Monday, midday meal workers ransacked a vehicle of NGO Akriti, which was carrying food for school kids of Silchar in Cachar district.

Northeast Now on Tuesday found the NGO team delivering mid-day meal in presence of a police team in the Govt. Girls HS School at Silchar on Tuesday afternoon.

Ranjit Das, a midday meal worker at the school, told Northeast Now, “On day one (Nov 1), they brought the food at 2:07 pm when the school was about to be closed.”

“The next day they came at 2:10 pm. Yesterday, I told them to come before 12 noon or else we won’t accept it. So, they have come with a police force today,” Das added.

“The food that they brought was not good enough and the students even found flies in it. More than half of the students have thrown the food in the dustbin.”

He further added, “We wouldn’t have accepted the food, but, as they came with a police force, we had no other choice.”

A senior teacher on condition of anonymity told Northeast Now, “Everything was going smoothly in our school as far as the midday meal is concerned.”

“The students from Class VI to VIII used to get hot and well-cooked food. Many a times we used to treat students of higher classes also if there was any food left out,” he added.

“Don’t know if there is any politics in the whole affair, but the students are the worst sufferers,” the teacher said, adding, “I hope a solution will come out at the earliest.”