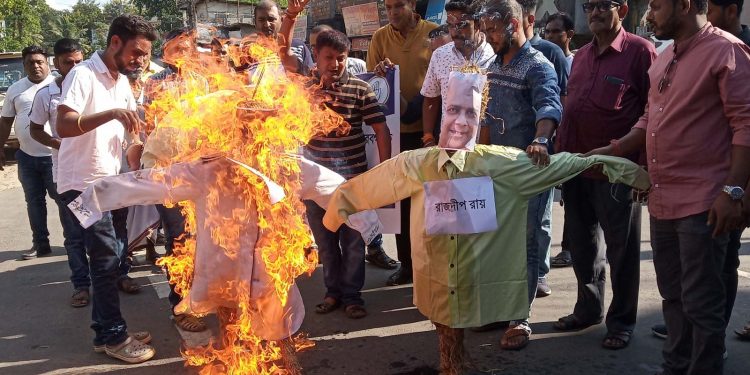 The situation in Silchar continues to remain tense after two girls – Sonali Das and Pompa Dey – died and several others received injuries in a road mishap at Meherpur on Wednesday night.

The members of Silchar Youth Congress took to the streets in large number on Monday afternoon, even violating section 144 CrPC, which is still in force in the town.

Kushal Dutta, president of Silchar Youth Congress, speaking to Northeast Now, said, “The parents of Sonali Das and Pompa Dey have openly complained as to why they were not allowed to see the faces of their daughters or even perform the last customary rituals.”

“We have burnt the effigies of Dr Rajdep Roy and Aminul Haque Laskar after performing the customary rituals.”

“These leaders should not forget our customary laws or the rights as protected and enshrined in our constitution,” Dutta added.

Former Assam minister Ajit Singh also participated in the burning of the effigies of Laskar and Roy and condemn the two political leaders.

Talking to Northeast Now, Singh said, “I strongly condemn both these two leaders (Laskar and Roy) for their alleged role in performing the last rites in a hurry.”

“This was possible only in case of Pompa and Sonali, who belonged to poor families and not someone born with a silver spoon, to raise strong opposition to such a move by these political leaders,” added Singh.