Storm leaves trail of destruction in Jorhat, one dies

Electric wires at several places were snapped by the high-speed winds, severing power supply at many places 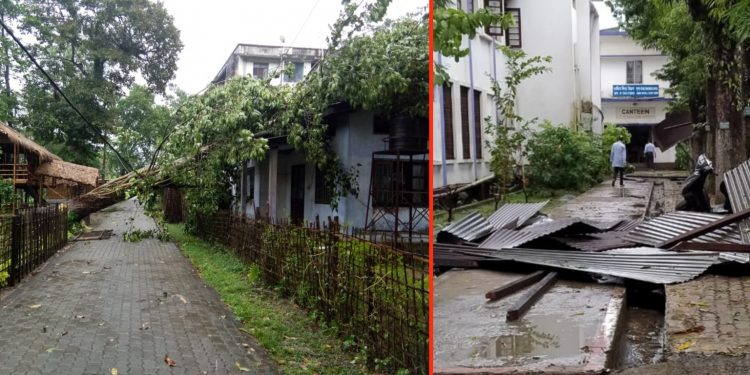 A cyclone-like storm lashed Jorhat and neighbouring areas on Monday morning, uprooting trees, electric poles and leaving behind a trail of massive destruction.

Identified as Debojit Das, the deceased was a resident of Duliagaon, Garmur on the outskirts of Jorhat town.

Electric wires at several places were snapped by the high-speed winds, severing power supply at many places.

Several houses and vehicles were also damaged by the uprooted trees.

Roofs of many houses and roadside billboards were also blown off by the wind.

A portion of the DCB College roof and Crescent Academy roof reportedly blew off.

The thunderstorm that followed the heavy winds brought life to a standstill in the city with most of the denizens forced to remain indoors.

The campuses of the Tocklai Tea Research Institute and the Mission Hospital are in shambles with the uprooting of several trees and poles.

Barnali Bora, in-charge of Division 2 of Assam Power Distribution Company Limited (APDCL) said about 12 to 15 poles were broken, out of which five are at AT Road.

“One 11KV pole at Rajabari had also been affected. Other areas are Bamungaon, Kenduguri, and DCB College Road,” she said.

“There is little chance of power being restored today,” she added.

The district administration is assessing the damage.

Majuli was also hit by the storm and trees and electric poles were uprooted at many places in the island district.

Weather reports suggest that the thunderstorm will continue till late on Monday and will gradually die out by Tuesday morning.