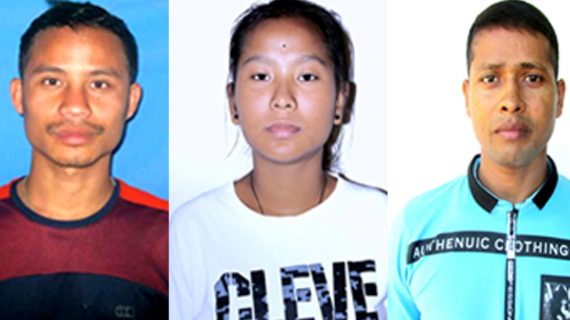 A martial art player from Assam, 22-year-old Nijwam Basumatary, who was selected for the ongoing Asian Games being organized at Jakarta in Indonesia, instead of playing for the country, now has to pass his times in selling pork at Baksa.

Not only Nijwam, two more players from Assam – 18-year-old Pompi Deori of Dholpur in Lakhimpur district and 33-year-old Tanmoy Nath of Tezpur – even after being selected to play pencak silat representing India at the Asiad 2018, have not been sent by the Indian Olympic Association.

At a time when the sports lovers of Assam have been delighted over six players of Assam including sprint queen Hima Das representing India, this fact of Indian Olympic Association depriving these three players from playing for the country came to light on Wednesday.

This was expressed before media persons by Nijwam Basumatary during a press conference at Dispur Press Club on Wednesday.

Nijwam Basumatary, whose name was on the top of the list of pencak silat players to play for India at Asiad 2018, has been dropped for a player from Haryana – Simran.

Basumatary has completely broken down after being deprived of playing at the Asiad 2018 as he has been practicing for years depositing hard-earned money by selling pork.

“I was preparing to play in Asian Games depositing money by selling pork. It can be said that the Central Government does not give importance towards the players from Assam and Northeast. We could get chance to play if the Government had given importance,” lamented Basumatary.

Basumatary, who has involved himself in the game for the last 8 years, also said he could play in the Asian Games at his own expenses if the Government gave him a chance play.

“Due to lack of interest shown by the Association, we failed to go to the Asian Games even after being qualified,” State president of the Association Paramananda Chayengiya said after the press conference.

But the member secretary of the Assam Government’s Student and Youth Welfare Committee Lakhya Konwar and Assam Olympic Association’s general secretary and Congress leader Rakibul Hussain said that they were not aware about the matter.

“I will not be able to say in this regard. The president of the Assam Olympic Association Tarun Gogoi and general secretary Rakibul Hussain would better know about it,” said Lakhya Konwar.

When contacted, Rakibul Hussain told Northeast Now, “If any such thing has happened, this is unethical. I will talk to IOA against it.”