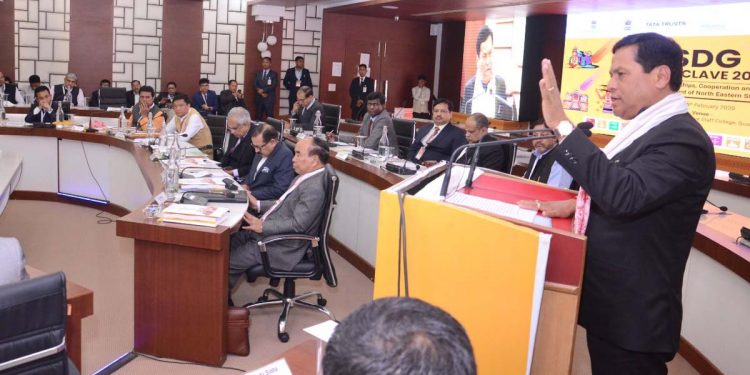 Assam chief minister Sarbananda Sonowal on Monday said the SDG Conclave 2020 added a new chapter in the development process of the northeastern region.

Sonowal observed that the Conclave would strengthen inter-state relations among the states of the region and give a vital push to sustainable development.

The Assam CM said this while speaking at the inaugural session of the SDG Concalve 2020 organized by NITI Aayog in association with DONER Ministry, NEC, UNDP, RIS, Chambers of Commerce and Tata Trusts at Assam Administrative Staff College in Guwahati.

He said to ensure a quality life for the younger generation, there is a need to catapult growth in the country.

Lauding Prime Minister Narendra Modi for identifying the potential and possibilities of the region, the Assam CM said as a result of his visionary initiatives people in the country today look at Northeast with a different viewpoint.

He said there is a new-found confidence among the people of the region and this would help in the growth of the Northeast.

Appreciating the NITI Aayog for organizing the Conclave in Guwahati, which is the first of its kind in the country, the Chief Minister said that innovation will open new floodgates of opportunities.

He said initiatives of NITI Aayog would also help in taking forward the vision of the Prime Minister.

He said due to Prime Minister Modi’s principle of ‘Transformation trough Transportation’ there is a rapid change in the connectivity sector in Northeast today.

This has also helped Assam to emerge as the gateway to the southeast Asian countries, he added.

Sonowal also requested the NITI Aayog Vice-Chairman Rajiv Kumar to take steps for setting up a branch office of the Aayog in Guwahati.

He said setting up such an office would help in the growth of the region. He also highlighted the milestones achieved by the Aspirational Districts of the State.

He further said this Conclave would fulfil the vision of “Ek Bharat, Shreshtha Bharat”.