Development of the state not possible without the growth of agriculture sector: Sarbananda Sonowal 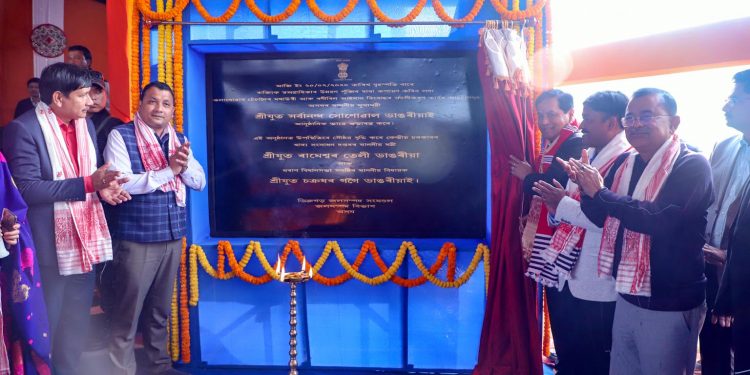 “That is why the state government has been taking up schemes like Chief Minister Samagra Gramya Unnyan Yojna, Mukhyamantrir Krishi Sa-Sajuli Yojna etc to empower the farmers of the state economically,” Sonowal said.

He was addressing a public gathering in Dibrugarh after launching the construction works of an embankment at Kolakhuwa Sesa River and ring bund at Bogibeel Ai thaan.

The projects are to be implemented with an amount of Rs. 27.5 crores under State-Owned Priority Development scheme (SOPD) of the Assam government.

The embankment would provide respite to nearly 20 thousand flood-affected people of the area and protect 6120-hectare farming lands from floods.

Doubling of farmers’ income in the state is the government’s top priority and the construction of embankment at Kolakhuwa Sesa River and ring bund at Bogibeel Ai would enable the people of Lorua and Bogibeel areas to increase their agricultural productivity by protecting from floods, he said.

Saying that the interest of the indigenous people of the state would always be protected, Sonowal asserted that the state government had shown its commitment towards this end by taking the historic step of providing land pattas to one lakh landless people and small tea growers of the state.

He also highlighted the need to facilitate a conducive environment for academic activities in the state to make Assam one of the top states in the country.

“No society can progress without education,” Sonowal reiterated, urging that teachers and parents to inspire the children to compete at the world stage.

He also urged the students’ organisations of the state to contribute to building a healthy environment for achieving academic excellence.

He also urged the people to not allow divisive forces to create unrest in the society based on rumours and misinformation.