The revival committee now is keen to take up this issue not just within the confines of Barak valley and Nagaon, but, to the national level as well.

A letter dated 22nd November has reached chief convener of this committee, Manabendra Chakraborty, through e-mail that same day from Rahul Gandhi who wrote of raising this issue at the national level.

The news is doing the rounds of the social media now and has once again opened up this issue for debate, let alone, giving a fillip to the protestors of Nagaon and Cachar paper mill to raise the issue. 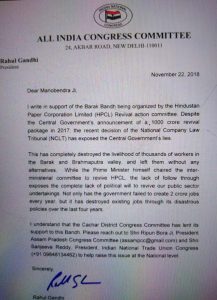 The revival committee now is keen to take up this issue not just within the confines of Barak valley and Nagaon, but to the national level as well.

This issue has stirred national President of the Congress party, who himself, in his letter wrote of contacting state President, Ripun Bora, and INTUC President, Sanjeeva Reddy, for raising this issue at the national level.

Chief convener of HPC revival committee, Manabendra Chakraborty, who is in Kolkata to attend a meeting, speaking over phone to Northeast Now said, “Rahul Gandhi’s concerns has given a boost to our fight for reviving these two paper mills of Cachar and Nagaon.

My personal opinion is that, Rahul ji, must have been pained to see 39 employees of these mills dying over the past two years, due to starvation.

Convenor of this committee and Secretary APCC, Sanjeev Roy, however spoke at length to this correspondent at his residence and said, “Rahul Gandhi ji says in his letter wrote that a government which spoke of giving two crores of jobs every year has shut down two mills in Assam, depriving lakhs of employees, directly or indirectly. Rahul ji has also mentioned in his letter of contacting state President Ripun Bora and INTUC President Sanjeeva Reddy for taking up this matter at the national level. His words have given us a lot of strength to carry forward our agitation to the next level.”

He added, “We would contact both these leaders very soon and take our agitation to New Delhi, via Dispur, so that, those who are deprived and others who talk of Advantage Assam for the state’s development, must see that these two mills are dying and only way to revive it is to join us and take it forward.”