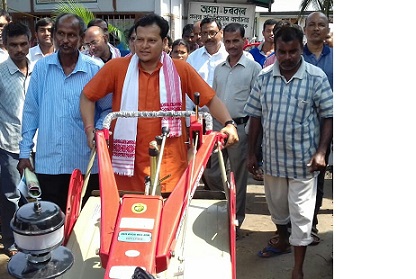 On Tuesday, MLA Das, while making an appeal to the progressive farmers of the district to adopt modern technology, said, “You are the backbone of our economy and when your income will be doubled through the application of scientific agricultural methods, the State itself will be leading towards  prosperity.”

Das made this appeal while addressing a farmers’ meet organized by the district agriculture department at its Mangaldai office premises to ceremonially launch the Government’s subsidized power tiller distribution to a total of two hundred selected farmer beneficiaries under centrally sponsored Bringing Green Revolution to Eastern India (BGREI) and National Food Security Mission (NFSM) for the year 2017-18.

Earlier, while explaining the objectives of the schemes, the district agriculture officer Deka said that the Government has been offering subsidy of around 40 per cent against the value of each of the power tiller.