The Teok Tea Estate management on Sunday declared lockout at the garden, a day after a senior doctor was lynched by the tea estate’s workers.

Besides, the Assam branch of Indian Medical Association (IMA) has also called for withdrawal of 24-hour medical services at the garden from 6 am on September 3.

Dr Deben Dutta, a doctor of Teok Tea Estate, was beaten to death by the workers of the garden on Saturday evening.

The police have detained 21 labourers, who were allegedly involved in the lynching.

The senior manager of the garden in a notice declared lockout in the main garden, factory and in the Konikor-Dalimi out-division of the estate, owned by Amalgamated Plantations Private Limited (APPL).

On Saturday afternoon, a large group of workers got enraged when they did not find the doctor in the garden hospital after a casual injured worker was brought for treatment.

The workers also broke equipment and vandalised the hospital when the admitted worker died.

As Dutta arrived late, he was physically assaulted by the mob and locked up in a room.

The welfare officer, who had come to his rescue, was also manhandled.

The manager was also heckled and manhandled by the garden workers.

The doctor was later rescued by police, CRPF personnel and administration officials.

Dutta was rushed to the Jorhat Medical College and Hospital (JMCH) here where he succumbed to his injuries.

IGP (Law and Order) Dipak Kedia on Sunday reached Jorhat, visited the garden and took stock of the situation.

Later in the afternoon, the IGP chaired a meeting of senior police officials at the Jorhat Police Station and reviewed the progress of investigation into the case.

He asked the police officials to take quick action in identifying and arresting the culprits. He said more persons are likely to be picked up and arrested in connection with the case.

He took stock of the police investigation regarding collection of evidences from various sources such as video clippings and witnesses, and other related matters to nail the culprits.

IGP Kedia has asked the police to make a watertight case so that the guilty are brought to justice.

The notice of the management said after the brutal assault there was a sense of insecurity, threat to life and property of the managerial personnel and families and of the garden.

It also said the lockout would not be lifted until the workers do not give a written assurance of discipline, good conduct, adherence for constitutional redressal of grievances.

The IMA, Assam branch too stated that such incidents of assaults  were happening at frequent intervals and that the government was doing nothing to stop these as no arrests were taking place or culprits being booked.

In view of this, barring emergency services, a call was given for withdrawal of all other medical services from September 3. 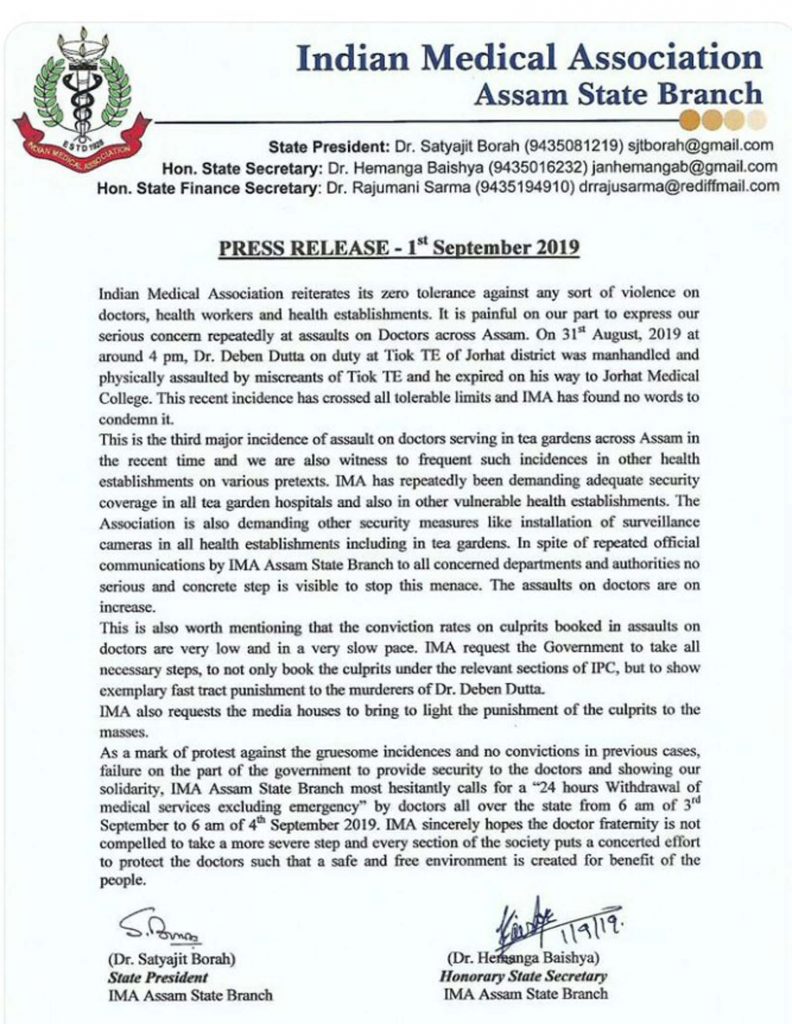 Teok Revenue Circle Officer Bhaskar Rajbongshi said Dutta was cremated on Sunday at Jagduar in Teok after his body was brought to his residence from JMCH where many paid homage to the departed soul.

Rajbongshi said the body of the worker, Somra Majhi, was also cremated on Sunday within the garden premises.

He said the office of the Assistant Labour Commissioner’s office, Jorhat will soon initiate the process for reconciliation by organising talks between the management and labour to bring back normalcy in the garden so that lockout could be lifted.

Jorhat Deputy Commissioner Roshni A Korati said on Monday, she would have a meeting with the tea estate management officials to discuss about the situation and the lockout.