Panic has gripped people in flood-hit districts of Lower Assam after a power company in Bhutan has announced that it would release excess waters from a hydro power dam located in the neighbouring country.

Although the flood condition in Assam has slightly improved in past two days, 20 of the total 33 districts of Assam are still under flood waters affecting over 34.82 lakh people in 2,933 villages.

A total of 71 people have died due to floods in Assam so far this year.

The panic gripped the people of some of the Lower Assam districts after Druk Green Power Corporation Limited issued notice that it would open gates of the dam to release excess waters. 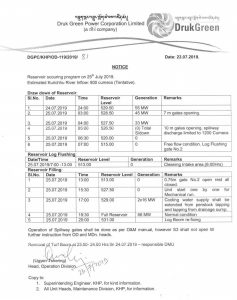 The company announced that it would be releasing over 1,200 cubic metre of excess waters per second from its reservoir.

The release of excess waters from the hydro power dam in Bhutan is likely to affect Kokrajhar, Barpeta, Bongaigaon, Chirang, Baksa and parts of Kamrup district in Assam.

It may be mentioned that the release of excess waters from the hydro power dams in Bhutan had wrecked havoc in Assam in the past inundating hundreds of villages and killing many people.

Hundreds of villages in Kokrajhar, Barpeta, Bongaigaon, Chirang, Baksa and parts of Kamrup districts are still marooned by the current wave of floods.

The condition is worst in Barpeta district where over 10.51 lakh people have been affected by floods till Wednesday.

More than 5 lakh people are still suffering in Kokrajhar and Bongaigaon districts of Assam till date, officials said.