Over 200 trees to be felled in Guwahati for a bridge! 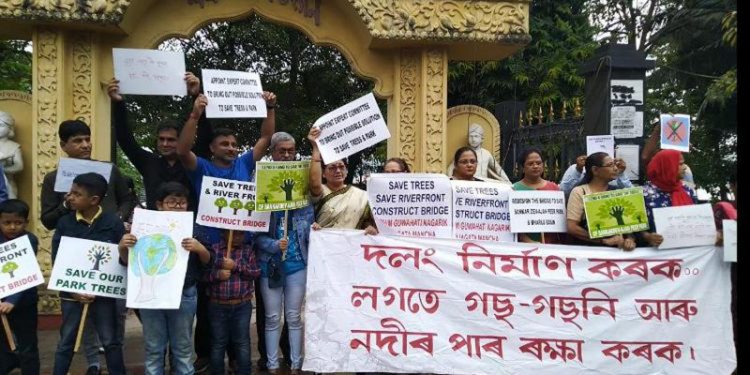 Protest against proposed felling of over 250 trees at Bharalumukh in Guwahati for constructing a bridge over the Brahmaputra. Image credit - Northeast Now

The Public Works Department (PWD) proposes to fell over 200 trees in Guwahati for constructing a bridge over the Brahmaputra.

The proposal of the PWD has been vehemently opposed by the people of the city.

The bridge will connect Bharalumukh, the southern bank of the river Brahmaputra in Guwahati with North Guwahati.

Hundreds of people in the Bharalumukh area took out a protest march on Sunday against the proposed felling of trees at Sankardev Park and Ajan Pir Park.

The protest march, led by Paschim Guwahati Nagarik Sajagata Mancha, was taken out from the Sankardev Park in Bharalumukh.

People comprising children, youths and senior citizens participated in the protest march by holding placards that read ‘Save Trees’, ‘Save Riverfront’, ‘Construct Bridge Without Destroying Nature’ and so on.

Speaking to Northeast Now, a senior citizen, Ramen Choudhury, who alo joined the protest, said, “It is really disheartening that a large number of trees are going to be cut down for the purpose of constructing a bridge.”

The agitators also formed a human chain to mark the protest.

“The PWD is planning to cut around 250 trees at Sankardev Park and Ajan Pir Park for the purpose of constructing the proposed Bharalumukh-North Guwahati bridge,” Choudhury claimed.

“The bridge is quite necessary for us but it should be constructed without destroying the nature,” he added.

“Before releasing the Detailed Project Report (DPR) of the bridge, the PWD should have talked with us,” he added.

“This disastrous step of PWD will create much trouble for the people in the future. Our duty is to plant trees and not cut them,” the senior citizen further said.