Only common ILP for Northeast may save Assam

Unfortunately for Assam, the state is headed by a chief minister who simply takes dictation from the Delhi Sultans and sings paeans glorifying every action taken by the Centre 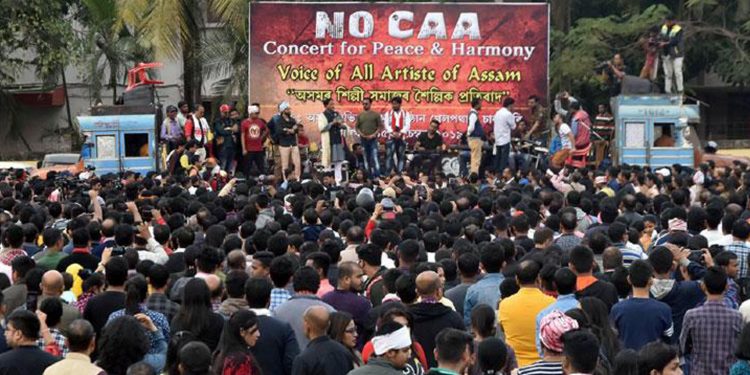 Protest against CAA by artist fraternity of Assam in Guwahati. (File image)

“There is a tide in the affairs of men
Which, taken at the flood, leads to fortune;
Omitted, all the voyage of their life
Is bound in shallows and in miseries”

Following the announcement made by the Centre that a new CAB (now CAA) would be tabled during the Winter Session of the Parliament, protests against the Bill became the order of the day on the streets of Assam mainly under the leadership of some leaders who vehemently opposed the earlier CAB in 2018.

However, for mysterious reasons these leaders disappeared from public domain for months soon after then BJP chief Amit Shah made a bold declaration in north Assam that the party would bring in a new CAB in the Parliament if voted to power.

It may be noted that Shah made the statement even before the Election Commission officially announced the 2019 Lok Sabha poll dates.

The rest is recent history. The Bill made a smooth sailing as was anticipated while virtually the entire Brahmaputra Valley came within the grip of massive protest and violence in several places while many died in police firing.

Most of the placards the protesters carry read CAA aami namano (we do not accept CAA). The captions of some protest photographs published by news papers read that the protesters demanded the scrapping of the CAA. Strangely enough, those leading the protest movement appear to be somewhat vague and confused about their demand(s).

Simply highlighting the ‘unacceptability’ of the CAA is not enough. If the demand is for scrapping the CAA, it should be prominently pin-pointed while for the time being not raising other related issues to avoid confusion.

The state governments of the Northeast  states other than those of Assam and Tripura exerted immense pressure on the Centre to keep their respective states out of the purview of the CAA and have succeeded. Among these states the bold role played by the Manipur government is most outstanding.

Despite belonging to the BJP, Manipur chief minister N Biren Singh succeeded in keeping the state out of the ambit of the CAA through mounting pressure on Delhi.

Unfortunately for Assam, the state is headed by a chief minister who simply takes dictation from the Delhi Sultans and sings paeans glorifying every action taken by the Centre in respect of Assam as great.

Historically speaking, no Assam CM can be blamed when compared to any Manipur CM. A Manipur CM knows that he has to deal with a warrior race known for their valour, chivalry, courage and fight for justice till the last drop of their blood. However, that is not the predicament faced by a CM of Assam.

It may be recalled that after the earlier CAB was tabled in the Parliament, entire Assam rocked with protest against the Bill in 2018. Strangely enough, in the midst of such roaring protests the panchayat elections were held and the BJP made a clean sweep, particularly in areas predominantly populated by ‘more indigenous’ people.

In fact this panchayat poll victory was a shot in the arm for the BJP and set the CAB rolling in the Parliament till the gates of the Rajya Sabha proved to be a rock of Gibralter for the saffron brigade. Again, despite a bold announcement of a new CAB in the poll manifesto, the BJP received whole hearted support from the ‘more indigenous’ population.

That clearly drives home the point in respect of the acceptability of the people of Assam towards every roadmap drawn by Delhi and as to why Assam CM perhaps can never think of becoming a Biren Singh even in his wildest dream.

Meanwhile, the ongoing movement against CAA, though peaceful, appears to be directionless like the 6-year long Assam Movement against foreigners which finally resulted in the Assam Accord that has today been reduced virtually to a waste paper. One may only hope, wish and pray that more waste papers may not litter around.

Those opposing the CAA may be told that the need of the hour is to initiate steps that may effectively nullify the Act. In this respect the civil society organisation Assam Public Works (APW) that was deeply involved in the hearings by the Supreme Court on the NRC, presently seems have come up with a positive idea of nullifying the CAA.

As per the Act and other exemptions and provisions made by the BJP-led NDA government, among the North-eastern states only Assam and Tripura will have to bear the burden of Hindu Bangladeshis in astronomical figures.

Meanwhile, only recently the leaders of civil society organisation Assam Public Works (APW) called on Meghalaya chief minister Conrad K Sangma and urged him to pressurise the Centre for a common Inner Line Permit (ILP) system for the entire Northeast.

On his part, the Meghalaya CM has reportedly assured the delegation to take up the matter with New Delhi. In the same vein, condemning the CAA, the All Bodo Students’ Union (ABSU) has also demanded implementation of a common ILP for all the NE states.

Unlike the ongoing directionless protests against CAA, from what had transpired between the Meghalaya CM and APW delegation, a faint ray of hope in respect of nullifying the new law seems to appear for the people of Assam at the end of the long and dark tunnel named CAA.

At this stage, one feels that the initiative being taken up with the Meghalaya CM though seemingly could be the only positive move that may be taken at this stage to nullify the CAA in Assam, it is almost certain that the move may only run into insurmountable roadblocks. One such roadblock may be raised by Dispur itself to keep the Centre in good humour, let alone what may befall.

That being a certainty almost in the superlative degree, the issue of common ILP for the NE may cause the Centre to give some serious thought only if a regional organisation like the North East Students’ Organisation (NESO) launches an intensive movement for the same.

However, at the end of the day, nothing may change in Assam as the state is as good as a sitting duck in the eyes of the Centre. Delhi may only laugh that the state civil society team is approaching the CM of another state for help.

As of now, speaking in the poet’s language, only NESO seemingly has the ability to create a “tide”, though it is clear that Dispur may say yes only on receiving a “Yes” dictation from Delhi or Nagpur.