The North-east India celebrated Christmas this year also with special prayers, hymns, and masses in churches, besides savouring traditional spread of ethnic delicacies.

The celebrations began from Sunday night with church services and fellowships where the congregation sang Christmas carols – both western and local songs, composed by the local spiritualists and composers.

The pre-Christmas celebrations till midnight on Sunday were extremely peaceful with no untoward incident reported from any state.

Like previous years, revellers came out in large numbers, dressed in their best attire, to join the mid-night masses and take part in the celebrations.

The upbeat festive spirit layered with traditional fervour was glaring everywhere across the region with colourful decorations, setting up of Christmas trees and illuminations were made by the revellers. 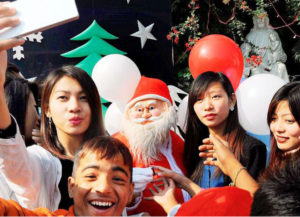 After the church services, mass prayers and other rituals it’s time for grand feasting on Monday to be continued till the New Year in most places of the region.

The rural folk in the remote villages of most of the states in the North-east engage in community feasting during the Christmas.

Festivities rent the air at the stroke of midnight when church bells rang, signalling the birth of Jesus Christ.

Churches, private and government buildings, schools, markets and homes have been decked up and illuminated in all the major towns of the predominantly Christian dominated states of the North-east.

The region had been witnessing brisk shopping for the last few days as locals hopped from shop to shop selecting their Christmas dresses for this year.

Students and professionals residing in other parts of the country make it a point to come home during this time of the year to celebrate Christmas with their family and friends.

Notably, most of the state governments of the Christian dominated states of the northeastern region declare holidays for several days till the New Year enabling people to celebrate and enjoy the festive season.

Governors and Chief Ministers of the northeastern states have extended their wishes to the people on the occasion.

Churches in Mizoram, Nagaland and Meghalaya play a very significant role in the life, culture and social fabric of the Christian dominated northeastern states.

There are over 5.3 million Christians living in Mizoram, Nagaland, Meghalaya and Manipur while there are a sizeable Christian population in the other northeastern states of Tripura, Assam, Arunachal Pradesh and Sikkim.

It is also heart-warming to witness non-Christians joining in the celebrations and feasts organised by various Christian organizations.