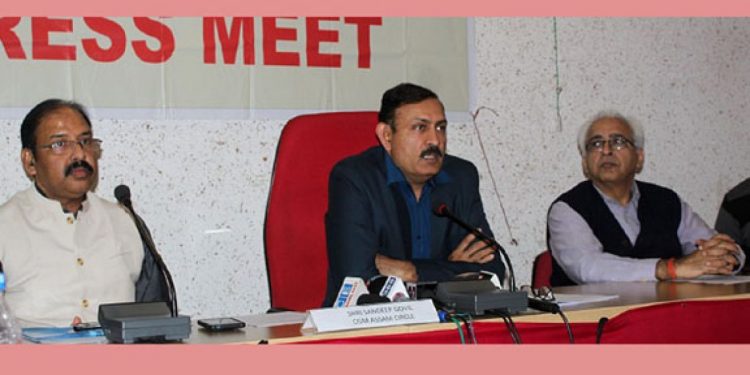 He was addressing the media at BSNL head-office in Guwahati.

“One newspaper reports something and it is picked by others. And in this digital age, every information spreads like wildfire,” Govil added.

“Such misinformation leads to misconception and confusion among the subscribers,” he said.

Lashing out at the news reports Govil added, “The particular newspaper did not mention any source from where it got the news. All it mentioned was ‘a source from the finance ministry’ informed them about BSNL and MTNL’s closure.”

ALSO READ: BSNL to roll out 4G services from March in Assam

“Government of India has no plans to close down BSNL and MTNL. Persons with vested interests are engaged in spreading false information about BSNL and MTNL,” Govil added.

He urged the people to not believe in such news reports and assured that BSNL is not going to shut down.

Govil further said the government has formed a group of ministers to look after the revival of BSNL and MTNL.

He also infomred that this group of ministers will soon announce a revival package for reviving the PSUs.

Agreeing to the fact that BSNL is going through a financial crunch, Govil informed that to raise money the BSNL has decided to monetise some of the company’s assets.

“We are carrying out various projects of the Indian and the Assam government. If BSNL was supposed to shut down then would have the government given us these projects?” he questioned.

“BSNL and the Assam government has inked an agreement for establishing 77 public facilitation centres across various towns of the state,” the CGM said.

Every digital service of the Assam government will be available in these facilitation centres.

BSNL has also signed an agreement with UIDAI for establishing Aadhaar Enrolment Kendras (AEK) in Assam.

“In Guwahati, five AEKs are functioning at Panbazar, Dispur, Ulubari, Kalapahar, and Jalukbari. Two AEKs at Rangiya and Bijoynagar will be opened soon,” the CGM added.

He also informed that BSNL 4G services will soon be launched in 18 more cities of the state by the end of October.