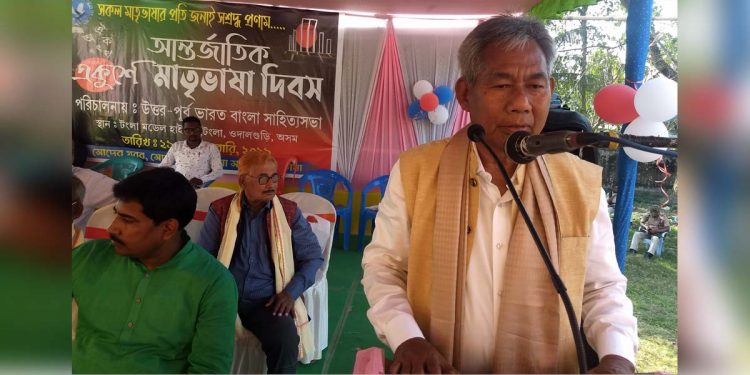 He said this while addressing the open session of an event organized on the occasion of the International Mother Language Day by Pub-Bharat Bangla Xahitya Xabha at Tangla Model School playground in Tangla town of Udalguri district.

Basumatary said, “The people of Bengali community are conscious in protecting and preaching their mother tongue which has gone way long in establishing Bengali language and literature in the world.”

The BTR deputy CEM said, “Language-literature is the mirror of a community and source of inspiration to build multicultural and inclusive societies where people of all races, faiths, languages and cultures get respect and can live with dignity.”

He further asserted that everyone must hold their mother tongue in high esteem.

He promised of extending support and resolving the issues which are plaguing the Tangla Model High School, the only Bangla medium school in the greater Tangla town of Udalguri district.

Khalingduar MCLA Dilip Kumar Boro, echoing the spirit of the occasion, asserted that language is a pillar for a community and the indigenous language and literature must be protected so that the vibrant culture and colour of the nation can be upheld.