Bodo Accord is a way for permanent peace: Modi 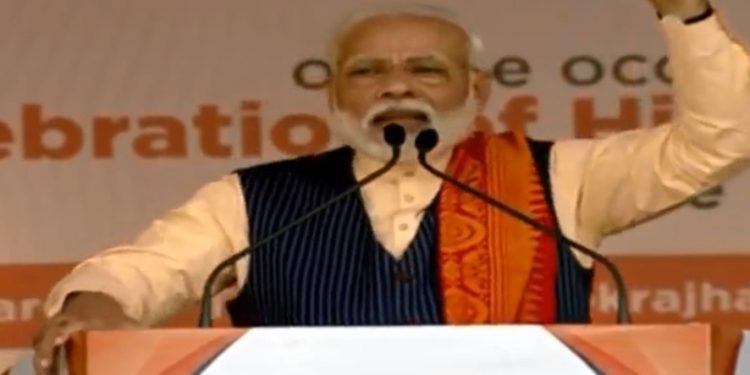 Modi is in Assam’s Kokrajhar district to celebrate the signing of Bodo Peace Accord.

While addressing a huge gathering at Kokrajhar, Modi said, “I’ve seen a lot of rallies in my political and public life, but I have never seen such a large crowd. This is certainly one of the largest political rallies in India in the post-Independence era.”

“As part of the Accord, Rs 1500 crore will be given as a special developmental package to help the Bodos,” he said.

In an apparent jibe at Congress leader Rahul Gandhi, Modi said,”At times some leaders talk about beating me with sticks, but I am shielded by your love and affection, need not fear ‘danda’.”

The Prime Minister termed the Bodo Accord as a way for permanent peace, a new beginning for the region.

“The Bodo accord is to celebrate the efforts of intellectuals of the region towards lasting peace. The historical accord has taken care of all pending issues, now we must hit the road to development. I congratulate Bodo youths for being back in the national mainstream,” Modi said.

Taking a dig at previous Congress government, he said, “Previous government acknowledged problems in Northeast, but shied away from finding a solution.”

With bringing the reference of the Citizenship (Amendment) Act (CAA), Modi said, “I want to assure Assamese people that there will be no mass infiltration.”

“We won’t allow a situation in Northeast where genuine Indian citizens are refugees in their own homelands,” added the PM.

He said that Centre will work expeditiously for implementation of the Clause 6 of Assam Accord once the report is submitted.

Modi said that the Armed Forces Special Powers Act (AFSPA) has been withdrawn from most of the North-eastern state since BJP government assumed power.

“Before we came to power, AFSPA was in force in most of the states in Northeast. After we came to power, the Act has been revoked from most regions in Tripura, Mizoram, Meghalaya, & Arunachal Pradesh,” he said.