The Majuli district administration has launched a massive drive against the gamosa being brought in to the river island district from outside the state prepared in power looms.

Notably, Assam Government has issued a blanket ban against import and selling of such gamosa across the State.

A team led by the executive magistrate of the district launched a massive drive across places like Kamalabari, Gormur and Bangaon and has seized huge quantity of such gamosas prepared in power looms and imported from outside the State.

An inspection and implementation squad has been formed by the district magistrate to launch the crusade in Majuli. 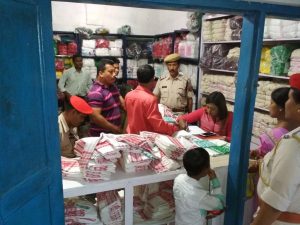 The team consists of top officials from the handloom and handicrafts department of the district and police.

Notably, the vigilance squad during its visit to the Jagaran showroom of Artfed at Kamalabari had seized a sizeable quantity of such gamosas.