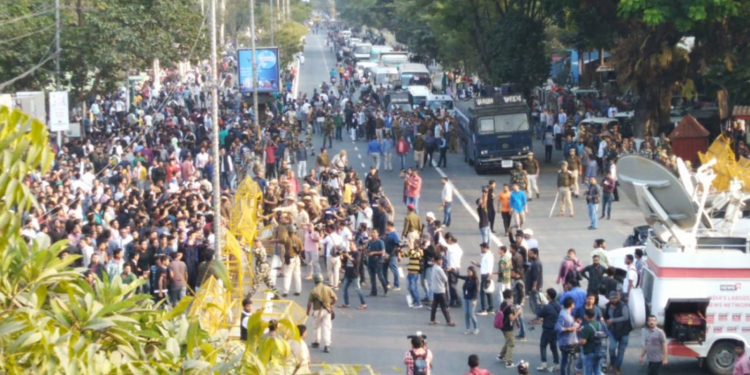 Urging people to agitate against CAB in a peaceful manner, the All Assam Students’ Union (AASU) has dared Prime Minister Narendra Modi, defence minister Rajnath Singh and Union home minister Amit Shah to participate in a public debate on the Bill.

“We dare the PM, the defence minister and the home minister to debate on CAB in a public forum and then they will know what the citizens actually want,” said AASU adviser Samujjal Bhattacharyya on Wednesday.

The contentious Citizenship (Amendment) Bill or CAB was passed in the Rajya Sabha on Wednesday night with 125 votes in favour of it and 105 votes against it.

The Bill was passed in the Lok Sabha on Monday.

Widespread protest against the Bill was witnessed in the Northeast against it with its epicentre in Assam being Guwahati.

Protesters protested in front of the Assam Secretariat and raised slogans against the government and the bill.

“Please protest peacefully and calmly. Certain unscrupulous elements and agents of the government will try to incite you and create disturbance during the agitations,” Bhattacharyya added.

“If the protest turns violent in any part of the state, the government will take full advantage of it,” he added.

As the protest took a violent turn, the army was called in and they flag marched the entire city of Guwahati.

Curfew was also imposed in Guwahati for an indefinite period and mobile internet services were also suspended for 24 hours.