Kaziranga National Park to get a heliport to make it more attractive to tourists: CM Sarbananda Sonowal 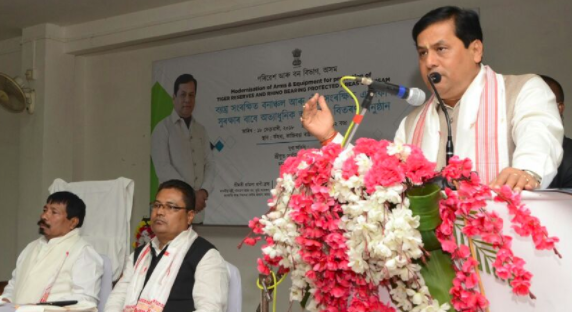 Kaziranga National Park will soon get a heliport to attract more visitors. The Chief Minister’s Office tweeted that the Assam Government will construct the heliport to make Kaziranga attractive to tourists.

Speaking at a programme in Kohora, Kaziranga, Chief Minister Sarbananda Sonowal directed three of his cabinet ministers to scout for land to build the proposed heliport near the national park known for housing one-horned rhinos.

“He directed the Forest Minister along with Water Resources Minister Keshab Mahanta and Agriculture Minister Atul Bora, who are the local MLAs of Kaliabor and Bokakhat constituencies where majority of the Kaziranga National Park falls, to identify a suitable location for building a heliport nearby the park for increasing tourist flow,” a release from CM Office added.

A heliport is an area used for landing and take-off of helicopters which includes buildings/facilities and typically contain one or more touchdown and lift off areas with limited facilities such as fuel or hangars.

Our aim in providing modern arms is to keep intact the heritage and pride of Kaziranga and other protected areas of Assam. We have many miles to go to win hearts of people. Together we must bring about a social movement in the area to make Kaziranga Swachh and attractive to tourists, the Chief Minister’s Office tweeted .