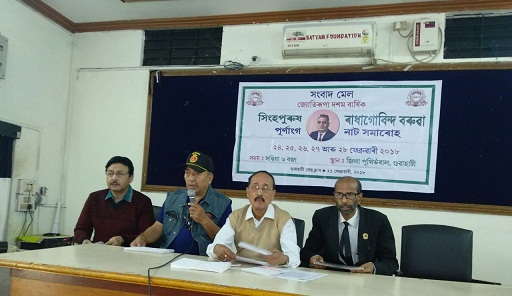 The socio-cultural organization, Jyotirupa will be organizing the Singha Purush Radha Govinda Baruah Memorial Drama Festival from February 24. The tenth edition of the five-day festival will take place at the District Library in Guwahati.

Keeping with RG Baruah’s vision, Jyotirupa aims to provide a platform for young talent from different corners of Assam to promote a theatre culture.

Addressing media-persons on Wednesday, Vice President of Jyotirupa, Bhuban Lahkar said, “This year we are stepping into the tenth year of our initiative. This drama festival is a tribute to Singha Purush Radha Govinda Baruah. This initiative started at a time when the unity and popularity of Assamese and other regional languages was facing devaluation. Our organization aims to reclaim the theatre and cultural movement to its original glory.”

“It is our responsibility to remind the new generation regarding the contribution of Radha Govinda Baruah in the field of theatre. He was an enterprising personality who enacted in plays and also helped stage many plays,” he added.

The festival will stage a total of five plays. A number of popular theatre groups from different parts of Assam will be part of the event. A play by Mumbai’s drama troupe Being Asian will also be staged on the final day.

The festival will be inaugurated by award-winning filmmaker and director Manju Borah.