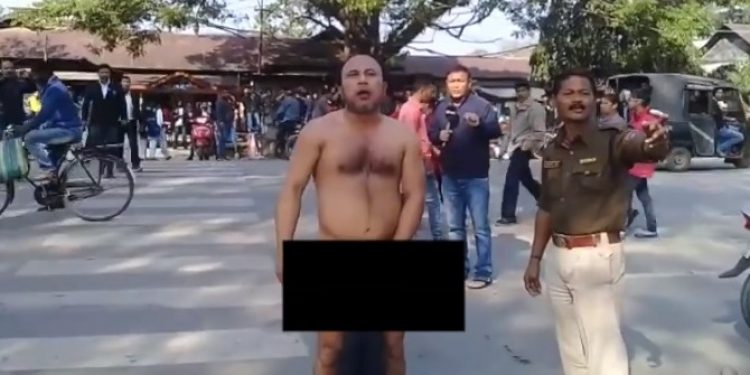 A protester in Jorhat on Friday took everyone by surprise by staging a nude protest in front of Jorhat DC office against the Citizenship (Amendment) Bill, 2016 and slapping sedition charge against scholar Hiren Gohain.

Mantu Dutta of Rajabari who off and on is seen carrying a placard and protesting on issues which he thinks is of importance, told newsmen that the arrest of people like scholar Hiren Gohain did not auger well for the government.

He further said that the anti people stand of the government would ultimately be the downfall of the BJP government.

He further said that he was not associated with any organization but was protesting against the Bill on an individual capacity.

Dutta also condemned the NRC process which he said was riddled with names of people who were not genuine Indian citizens and that they had managed to get themselves incorporated in the list by furnishing false papers.

Dutta was arrested by the police and clothed.

Meanwhile, the Jorhat Bar Association took out a protest rally against the Bill and submitted a memorandum at the deputy commissioner’s office in this regard.

Carrying placards and shouting slogans, lawyers of the Association welded their way across the main thoroughfares of the town.