Second hospital in Assam after GMCH to go green 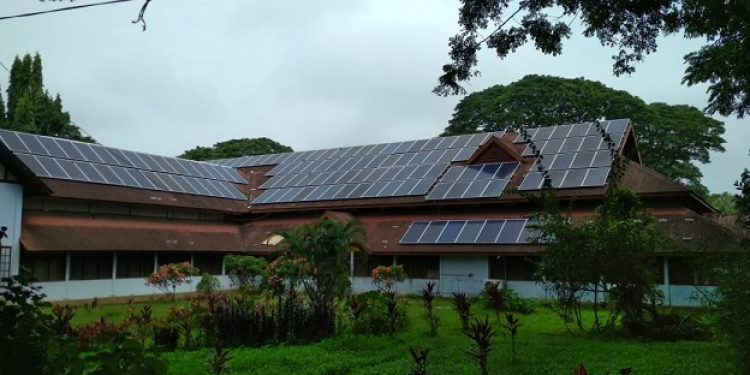 The Jorhat Christian Medical Centre better known as Jorhat Mission Hospital will soon be drawing 80 per cent of its power from solar panels and the rest from APDCL.

This is the second hospital in Assam after GMCH to be solar powered under the Rooftop Solar Programme of the Ministry of New and Renewable Energy being implemented by Assam Energy Development Agency.

Hospital administrator Pawan Bhuyan said that this would cut electricity cost by nearly 50 per cent.
He said that the solar panels would be inter linked with APDCL with 300 kilowatt being supplied by the solar power grid directly to the hospital during the daytime. This was 80 per cent of the total requirement of 400 kw and the rest 20 per cent would be from APDCL.

“We pay almost Rs 4 lakh to Assam Power Distribution Company Limited monthly and now the bill will be about Rs. 2.50 lakh. The power generated by the solar panels during the daytime will be monitored by the agency from Guwahati with a sophisticated mechanism and we will have to pay only for the units generated.  If for some reason the generation is not sufficient or three is a glitch then we will automatically switch over to APDCL power supply and at night the power will be entirely drawn from APDCL, ” Bhuyan said.

Bhuyan said that at present the hospital pays Rs 8 per commercial unit to APDCL but now they would have to pay Rs 3.43 to Firstgreen Consulting Private Limited, the empanelled vendor with Assam Energy Development Agency under the RESCOE mode.

The other mode was the CAPEX mode in which the government gives a subsidy per kilowatt and the balance cost of the solar power plant has to be borne by the beneficiary.  The agency would also take care of maintenance free of cost for the next 25 years following which the panels will become defunct.