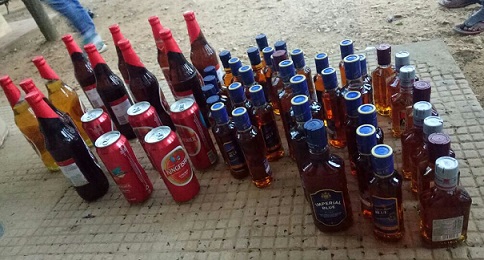 In order to stop trade of illicit country-made liquor as well as foreign liquor, Hojai Police continues its operations in the entire Hojai district and has been successful in the last three months to deal firmly with illicit liquor traders.

As part of the anti-illicit liquor drive, on Saturday afternoon, a team of Daboka Police led by Hojai Deputy Superintendent of Police Bhanita Nath once again carried out raids in some houses at Madertuli and Jabrakhuwa area in Daboka under Hojai district.

During the raids, the police was able to seize huge quantity of illicit liquor both foreign as well as country liquor stored illegally in those houses.

As per police, more raids are expected during the next couple of days since the authority wants illicit country and foreign liquor trade to be dealt with firmly.

It may be mentioned that on May 7, 2018 also, a team of Daboka Police led by Deputy Superintendent of Police Bhanita Nath carried out raids in many liquor shops at Madertuli area in Daboka under Hojai district.

During the operation, the police team seized a huge quantity of both foreign as well as country liquors stored illegally in the shop. They also caught three persons during the raid.

Earlier on April 18, 2018 night, a Daboka Police team led by DSP Binita Nath raided various hotels on by the roadside of NH 36 at Jabrakhuwa in Hojai district.