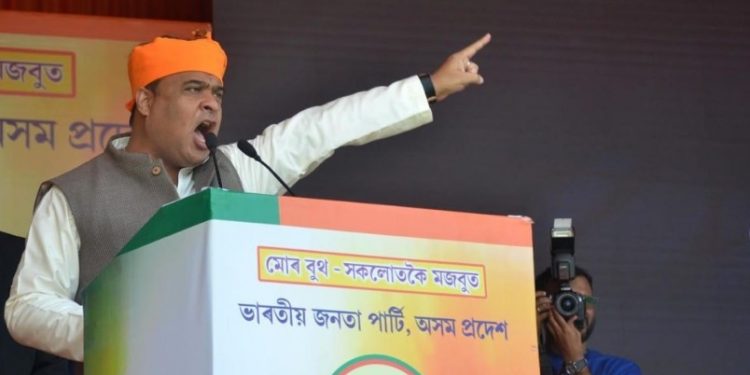 Launching a scathing attack on Congress and AIUDF, Assam finance minister Himanta Biswa Sarma on Saturday said that the BJP is only trying to rectify the blunders committed by the Congress through Citizenship (Amendment) Act (CAA).

Sarma said this while addressing a rally of booth level presidents of the BJP at Khanapara in Guwahati.

Minister Sarma appealed to the BJP workers to continue the fight against the communal forces like Badruddin Ajmal.

Sarma condemned those who had taken part in violent protests across the State and said that if somebody wants to use the movement to fulfil their dreams to become chief minister of the state or float a new political forum, the BJP will give them a befitting answer politically.

“I never thought that those people from Barpeta and Dhubri who we still doubt will come and destroy and vandalize the Srimanta Sankardeva Kalakshetra in the name of protest. I never imagine that house of BJP’s MLAs will be set on fire, parents of BJP leaders would be abused on Facebook and twitter…this is not our culture,” Sarma said.

The minister also blamed former Assam chief minister Prafulla Kumar Mahanta for amending the Citizenship Act in 1987 to give citizenship to wards of Bangladeshi infiltrators.

“The 855 martyrs of Assam movement would not have agreed to sacrifice their lives if they knew that Prafulla Kumar Mahanta would make 1971 as cut off date for detecting and deporting the illegal Bangladeshi infiltrators,” he said.

He said that the CAA would only allow maximum 3.5 lakh to 4 lakh people to apply for Indian citizenship.

“If it is more than this, we would quit politics,” Sarma said.

He said the BJP is not trying to bring in new people from Bangladesh but trying to settle those who were brought to Assam by Congress in the past.

“We are making December 2014 as a cut off date because after that not a single infiltrator had entered Assam since then. Prime Minister Narendra Modi ensured that there is no atrocities on Hindus in Bangladesh, which the Congress had failed to do in the past,” Sarma added.