A crucial meeting between Indigenous Students’ Forum of Dima Hasao district of Assam, NF Railway authorities and Dima Hasao district administration was held at the conference hall of the Deputy Commissioner’s office at Haflong on Thursday to discuss the land compensation issue to those who have lost their agricultural and residential lands for the broad gauge conversion along Lumding-Silchar route.

In the meeting that lasted over two hours, the NF Railway authorities have made it clear that there is no provision for additional compensation apart from what was given as per law earlier.

However, the NF Railway authorities assured to take up the matter with the State Government and higher authorities of the Indian Railways.

Those present from the NF Railway side said that a solution can be arrived at only after meeting with the Chief Secretary to the Government of Assam and the General Manager of NF Railway.

The railway delegation present in the meeting also assured that a Hill Queen train service will be introduced in the Lumding-Silchar sector from April next.

Additional Superintendent of Police Pushpa Singh and Additional Deputy Commissioner Dipak Jidung were also present in the meeting apart from other officials.

The Railway officials also said that as part of the compensation, a sum of Rs 1,78,37,417 has been already released by the Railways to the district administration to be given as compensation to the affected. 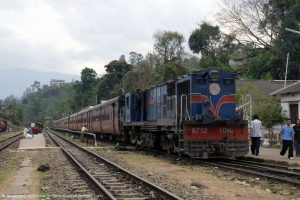 Now that the demand for additional compensation has cropped up recently, they will have to put forth the matter in front of the Chief Secretary to the Government of Assam and the General Manager of NF Railway.

They also said, if the need arises the matter will also be taken up with the Rail Board.

On the other hand, the president of the Indigenous Students’ Forum said that if the matter of land compensation is not resolved within March 31, they will be compelled to launch rail blockade agitation from April 1 next.