At least four persons including a 6-year-old child sustained injuries in a horrific road accident at Latasil Chariali in Guwahati on Saturday.

As many as three vehicles – a pickup van, a private car and a city bus were involved in the accident. 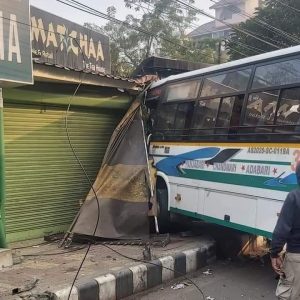 The accident took place when a speeding cow-laden pick up van toppled after colliding with a city bus.

Following the collision with the pickup van, the city bus lost control and hit a private car, which was travelling from the opposite side.

“The pickup van was travelling at a high speed,” said an eyewitness.

All the three vehicles were badly damaged in the accident.

Private properties also were destroyed as the city bus skidded off the road following the accident.

Although no casualty was reported in the accident, at least 4 persons including a 6-year-old child sustained injuries in the mishap.

Meanwhile, drivers of both the pickup van and the city bus fled from the spot following the accident.

The Traffic Branch of Latasil Police Station has launched an investigation into the accident are trying to apprehend the escaped drivers.