The United Liberation Front of Asom-Independent (ULFA-I) has claimed the responsibility for the blast that had shaken Digboi in the Tinsukia district in the evening on Friday.

Claiming the responsibility for the blast, militant outfit ULFA-I in a statement on Saturday said the incident of bomb attack took place at the camp of 3 No Garhwal Regiment of the Army located in Digboi.

The ULFA(I) in its statement in Assamese said: “At around 6.45 in the evening on 22.01.2021 last, an incident of bomb attack took place at the Army camp of 3 No Garhwal Regiment in Digboi.”

“That act was carried out by the United Liberation Front of Asom-Independent,” the outfit said. 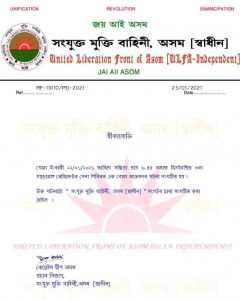 There are several examples of ULFA-I carrying out subversive activities ahead of the Republic Day or Independence Day celebrations in Assam in the past.

The ULFA(I ) has issued a customary call for ‘general strike’ on January 26, with an appeal to the people of the region to boycott the Republic Day celebrations.

“This so-called Republic Day of India is a confrontation to our ideals and hence we have been opposing it. We call upon all political and apolitical people of WeSEA (West Eastern South East Asia) to boycott the celebrations of this Indian political event,” the ULFA(I) said in a statement.