Grassroot Olympic – Mission Talent Hunt to be launched in Assam 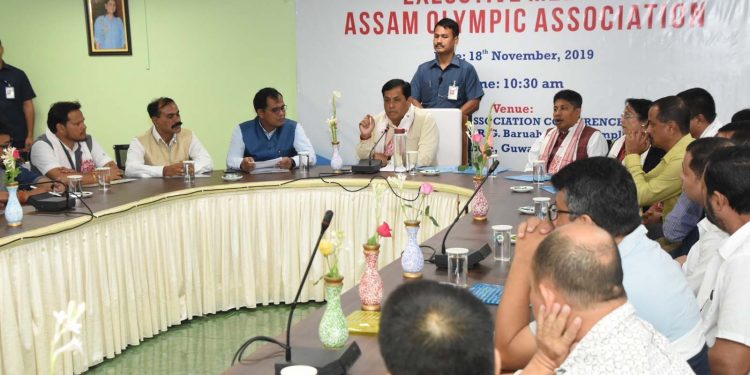 Assam chief minister Sarbananda Sonowal, who is also the president of the Association, said this during its first executive committee meeting on Monday.

The executive committee meeting of the Association was held at its office conference room at RG Baruah Sports Complex in Guwahati.

During the meeting, Sonowal said AOA will launch a new programme, ‘Grassroot Olympic – Mission Talent Hunt’ in the state to identify the promising sportspersons and providing them adequate opportunities for grooming their talents.

A committee under the chairmanship of the AOA vice chairman and MoS for health Pijush Hazarika was also formed in the meeting on Monday.

The committee will prepare a detailed action plan and connect with the field to spot the talented sportspersons.

The CM underlined the need for a sporting culture in the state to promote sports among youth.

In this regard, he said under the proposed programme, AOA will organize sports events in five categories covering players from 10 years of age to 60 years in the state.

He also stressed on developing a strong network of grassroot level sports organizations with the AOA to take forward this mission in the state.

In order to integrate culture with sports, he also suggested organizing cultural performance by local artists at the launch of the field level sports events.

The CM said a proper synthesis of education, culture and sports is a must to develop discipline and order in society.

He said AOA must set new tradition in the state for all down the line sports organizations to follow.

Sonowal also said he would interact with the sportspersons soon who would represent the state in the ensuing Khelo India Youth Games scheduled to be held in Assam from January 10-22, 2020.

During the meeting, various sub-committees and commissions were also constituted.

On the sidelines of the executive committee meeting, the CM also interacted with the district sports officers of the state.