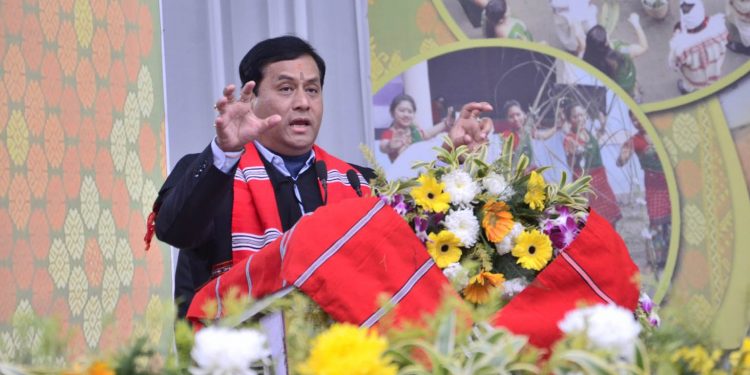 Assam Chief Minister Sarbananda Sonowal on Wednesday said that Mising people are the indispensable part of the larger demography of the state.

“The fruits of development that Assam is enjoying at present can significantly be attributed to the cultural and educational contribution of the Mising community,” Sonowal said.

He was speaking at the central celebration of Ali-Aye-Ligang at Ghunasuti in Lakhimpur district.

“Considering the immense contribution of the people, the Assam government is taking several schemes for the socio-economic, cultural and academic empowerment of the Mising community,” Sonowal said.

To sustain the valuable role of the Mising people, they would have to take the help of education and adapt themselves to the changing circumstances induced by science and technology, Sonowal said.

Paying deep tribute to various personalities belonging to the Mising community, Sonowal urged upon the younger generation to emulate the personalities like Taburam Taid, Rana Patir and others.

Hailing the people of Ghunasuti, which is an interior part of Lakhimpur district, Sonowal said that the enthusiasm radiated by them in celebrating Ali-Aye-Lrigang is a source of motivation and encouragement for the government.

He also announced that to remove the bottleneck of communication and to facilitate good communication between Ghunasuti and Lakhimpur, the government would construct a bridge at Ghagarghat and would lay new roads in phases.

He also said that besides facilitating expeditious completion of a cultural complex after the name of late linguist Taburam Taid at Gogamukh, State government would install a large size statue of the late academician at Ghunasuti and announced Rs 20 lakh from government’s untied fund for this purpose.

On the occasion, Sonowal also felicitated nine eminent personalities of the Mising community acknowledging their role in different walks of social life.

He also released a souvenir on the occasion.

Ali-Aye-Ligang is a spring festival associated with agriculture, especially with the beginning of the Ahu paddy cultivation, which is celebrated by the Mising community in Assam.

The festival marks the onset of sowing seeds. The name of the festival is made up of three terms, ‘Ali’, legumes, ‘Aye’, seed and ‘Ligang’, to sow.